A Love of Horses 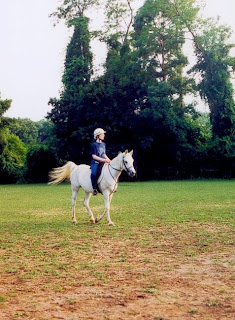 According to the American Horse Council in 2009, New Jersey had 83,000 horses. Wyoming had 99,000. Of course, New Jersey has a lot more people than Wyoming. Despite the expense of keeping a horse, the Garden State has many horse lovers. While horse racing is popular and there are several tracks, there are also many beautiful trails and parks where horses and their owners can go riding.

I went horseback riding a few times while I was in college. The horses I rode took advantage of my good nature and absence of handling skills. If the horse saw a particularly appetizing clump of grass, the horse stopped to eat it. I could not encourage the horse to move along. One time, a friend who had gone riding with me, fell off her horse. Fortunately, she was not badly injured, but it was scary. Horses are rather large and it's a long way to the ground.

I learned quickly that horses have minds of their own.

Nevertheless, one of our daughters developed a love of horses in her teenage years. Horseback riding lessons are expensive, but she saved her money and took as many lessons as she could.  She became a volunteer in the SPUR program just so she could be around horses. She truly enjoyed the company of the massive beasts with their ravenous appetites for carrots. (Carrots disappeared from our refrigerator on a regular basis.)

Our daughter was too young to drive at that point, so I wound up taking her to her horseback riding lessons and taking her to the local SPUR facility. I found it difficult to watch her ride because I was always afraid she would fall off the horse! Still, I did not mind being in the stable and watching the horses--who were always watching me and hoping for a carrot.

Due to that experience, horses wound up being channeled into my books. In THE COMPANY YOU KEEP, the Brants have a farm in New Jersey with horses. They went into debt to build a stable. In the story, that debt is threatening their livelihood. In THE PIRATE'S WRAITH, the heroine meets up with a horse on an island. There's Smialek (Polish for daredevil) in THE BEAST OF BLACKBIRCH MANOR and in PATRIOT'S HEART, there is another horse. In THE COWBOY'S MIRACLE, which will be released in December, there's Navigator, an aging but trusty companion for the hero.

I have as much fun naming imaginary horses as I do naming my imaginary ships. :-)

I'm sure if my daughter had not been so enamored of horses, there would be no horses in my stories. But--thanks to her--there are. I once heard Mary Higgins Clark speak about writing and she said, "Everything is grist for the mill." She was right. :-)

Penny, I have horses in MY books too. Lots of them! LOL! Like your daughter, I was an enthusiastic rider in my youth. Since I lived in a very small town in West Virginia, I was even able to have my own pony, Papoose. He became the model for my Whisper Horse series. There is just something so calming about the company of horses. Their strength and beauty speak to my soul.
I'm delighted to hear they've trotted their way into YOUR books too.

Thanks for stopping here at my blog. :-)

You were so fortunate to have your own pony--and I love its name.

I have your book. Now I just have to sit down and read it. It now officially goes to the top of my TBR list. (But I have to finish Book of Ages first.)

I used to ride horses somewhat when I was a kid. At summer camp and one of my friends had them.
Once I jumped on one side and fell straight off the other. Once we moved a herd of horses from one field to another and took them right down city streets!
My neighbors have horses and I give them carrots.

Must have been exciting moving a herd of horses down the street. I suppose you felt like a cowboy!