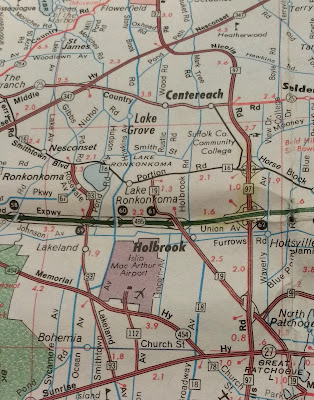 I've been married for nearly forty years to a man who has no sense of direction. He possesses many other fine qualities, but it would be helpful if he was able to distinguish north from south and east from west. He compensates for his deficiency by using maps. He prints out endless reams of paper when he must travel somewhere new. He maps out every turn. He always fears getting lost.

Many have suggested he should purchase a GPS. He just laughs and tells them I'm his GPS. And I am.

While it is true that I have taken a few wrong turns in my life, I am not afraid of getting lost. I've lived in New Jersey all my life. It's a peninsula. There's water on the east coast, southern coast, and western coast. Besides, no matter where you are in NJ, there's either a Parkway sign or a Turnpike sign to guide you along. Besides, sometimes a new road is the start of a wonderful adventure.

While we were cruising along on the Carnival Sunshine in the Atlantic Ocean, hubby always had the map of the ship in his pocket. I really didn't think he could get very lost on the ship, but he worried about it enough to carry the little map with him at all times.

How about you? Do you have a good sense of direction or not?

Penny, Your post made me laugh. Being married to a man who when he says turn right I know I should go left.

So glad I'm not the only one with a directionally challenged husband. :-)