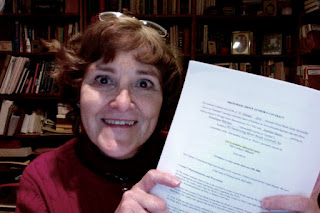 I signed a contract on a proposal for The Cowboy's Miracle, which is to be part of Prism Book Group's Christmas Cowboys Series. I spent three days thinking and writing and daydreaming about the proposal. The idea consumed me while I was driving, loading the dishwasher, doing laundry, and especially when I sat down for a few minutes to crochet. The best term I can think of to describe this phenomenon is by calling it a creative fever.

I'm not the first person use that term either. And it's not a terrible disease, it's actually fun. True, it's a big distraction, but it's certainly better than concentrating on mundane tasks. At any rate, I sent off the proposal and received a contract. I love publishing in this technological age. Everything is FAST. Of course, now I have to write the book, but I'm looking forward to it.

Meanwhile, Outside Blessings is already on prerelease at Smashwords. So if you have a few minutes surf on over to https://www.smashwords.com/books/view/610444 and download a sample.
Posted by Penelope Marzec at 2/09/2016 10:05:00 AM