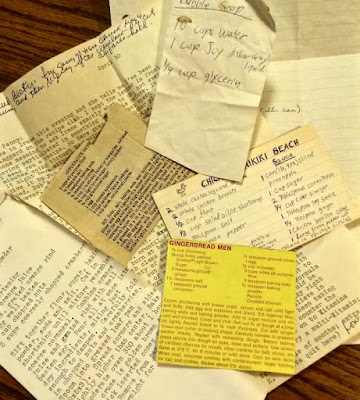 I have been collecting recipes for a long time. Originally, I filed them in a box for 3 x 5 cards. However, I didn't copy them all to 3 x 5 cards. Some were letters, which I simply folded up and filed in the proper category. Some were clippings from the newspaper. (Hint: Newspaper clippings don't hold up well with time.) Some recipes came from the back of a box. A few were scribbled hastily on a small slip of paper.

Nowadays, I use a three-ring binder to keep my recipes in order. If I find a recipe online, I print it out, slip it into a plastic sleeve, and file it in the proper category in the binder. So much neater than the old 3 x 5 file box!

My heroine in PATRIOT'S PRIDE collects recipes, too. However, she calls them receipts. For a long time, recipes were called receipts.

Dictionary.com has this reference:

Learned something new, and I like this. I'm looking forward to the book.

Thanks! I enjoy delving into the details of history.

Hi Penelope. In answer to your question, "Yes." I think it not only adds realism to a historical, but it shows the readers you have done your research. My third novel was set in 1800 and I used the word "receipt" in reference to a recipe.Thanks for the informative post! Blessings, Elaine