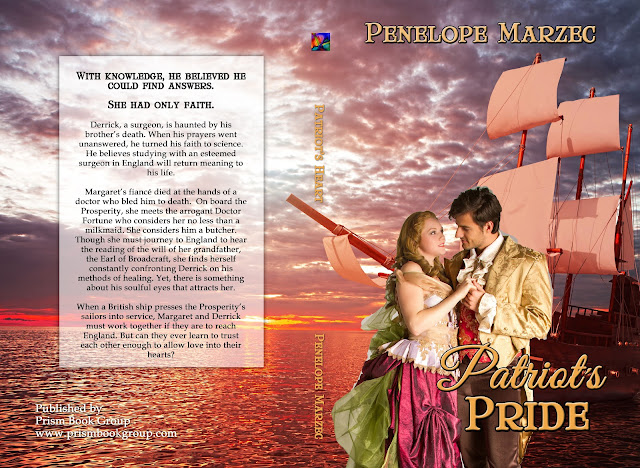 PATRIOT'S PRIDE is now available. The cover shown above is that of the print edition, which you can find on Amazon at Patriot's Pride, print edition. Set after the American Revolutionary War, it is the sequel to PATRIOT'S HEART and follows Margaret, the younger sister of Agnes.

Below is an excerpt from the beginning of the book.

Margaret McGowan watched the distance between the ship and the pier widen into a watery chasm. Swamped by an overwhelming sense of loneliness, she clenched her teeth and scolded herself for being such a ninny. She had the opportunity to go to England. She would visit Broadcraft Hall, the ancestral home where her mother was born and her grandfather had died. In all her eighteen years, she had seldom traveled far from Leedsville, New Jersey, until now.

A grand adventure awaited her.

Despite reasoning with herself on the importance of this enterprise, a renegade tear rolled down her cheek as she leaned on the rail. She loved her family, but they barely scraped by after losing the house and the livestock during the war. The doling out of a hundred acres for every soldier in the Continental army had been an empty promise. Worst of all, though Uncle Fitz had returned from his service, her father never did. He died on a prison ship.

She offered a heartfelt prayer for her dear ones. In truth, this journey was for them too.

Calmer, she opened her eyes and took in a ragged breath. The harbor blended into the line of hills in the distance, and she turned away from the rail. She pulled the shawl tighter about her body and set her jaw. This trip was essential. In his last will and testament, her grandfather, the Earl of Broadcraft, stipulated that either Margaret or her sister must be present for the reading of the will. The solicitor explained much concerning the entail in a long letter. Since her mother had married a commoner, neither Margaret nor her sister would inherit the estate or, as women, the title.

Therefore, the entail and title belonged to Lord Isaac Whittington, the earl’s first cousin, once removed. Yet, everyone assumed Margaret and her sister would receive something of value. Otherwise, why should one of them be present when the will was read?

Margaret hoped for a portrait of her mother, whom she had never known, and perhaps even a portrait of the earl himself. In the past six years, they had corresponded by letters. She would value a likeness of her grandfather as a true treasure.

Her gaze swept the deck, and a shiver of apprehension moved through her. Though the ship was far larger than the McGowan’s barn, the vast ocean surrounding it made it appear quite small. What if it sank?

She shoved the frightening idea to the back of her mind and watched the other passengers strolling on the deck. In the front of the ship, she spied the two women who were to share a tiny cabin with her and her companion. Cecelia Cavendish, who was blind, and her cousin, Louisa Boulton, were young, probably near to Margaret’s own age of eighteen. Cecelia intended to go to Paris to meet Franz Mesmer, who claimed his treatment cured blindness. Margaret never heard of Franz Mesmer. Furthermore, she doubted his method. Only the Lord performed the miracle of giving sight to the blind.

Louisa’s behavior disturbed her. Shying away from everyone, Louisa muttered to herself. She sat tucked between a mast and a barrel, staring at her fancy shoes. It seemed apparent the two women with their silk gowns came from wealthy families. Cecelia wore dark glasses, but possessed fine features. She sang in a sweet voice, entertaining the sailors as they went about their chores.

Margaret glanced down at her plain brown frock, which she wore to church on Sundays. The midwife had given it to her three years ago in exchange for her baked goods. Cecilia and Louisa came aboard with two large trunks each, while Margaret’s necessities fit into a single small one. Still, the cousins must travel farther, for the ship would be going on to France after it stopped in London. Cecelia claimed she and her cousin spoke fluent French.

Margaret did not know French. She’d acquired several German words from Hobart, her family’s hired man, and some Latin from her brother-in-law, but few Frenchmen stopped for any length of time in the small town of Leedsville.

She rubbed the top of each shoe on her stockings to remove the dust. Despite her common clothing, she was the granddaughter of an earl. With her head held high, she decided upon a promenade around the deck. However, walking became difficult when the ship reached open water. Monstrous waves soon stymied her plans.

She stumbled twice, holding onto railings as the ship went up and down. Out of nowhere, something hit her in the face. Unprepared for the force of the blow, she lost her balance and fell backwards. Two strong arms caught her, which prevented her from crashing on the wooden deck in an ungracious heap.

“Are you hurt?” The deep male voice came from behind her as he set her on her feet.

She stared at the rather elaborate hat on the deck in front of her and touched the welt swelling on her forehead. “No. Startled, though. I didn’t realize I needed to watch out for flying hats. Thank you for catching me.”

“My pleasure.” He steadied her as she straightened her skirts. “If I may introduce myself, I am Derrick Fortune, of Philadelphia.”

He carried an unmistakable note of pride in his tone. Did he think she had heard of him? Well, she had not.

“Miss Margaret McGowan, of Leedsville, a small town in New Jersey.” She fussed with one flounce before she stepped away, turned, and glanced upward. He stood rather tall, forcing her to tilt her head back. His clothing, though somber, was fashioned from fine cloth and showed the lines of impeccable tailoring. She would not call him handsome, for his sunken cheeks gave him a gaunt appearance. A disturbing thought heightened her anxiety. Did he suffer from consumption—the same disease which had taken the life of her dear Francis?

“Is Leedsville near a more notable city?” he asked.

She frowned. “We have no cities nearby, but there are larger towns like Monmouth Courthouse. That’s where the Battle of Monmouth was fought.”

A pained expression crossed his features. “Yes. I know of it.” The look in his soulful dark eyes caught her, and a curious sensation swept over her, leaving her somewhat bewildered. Perhaps the excitement of the journey affected her more than she thought at first, or the wretched movement of the ship unsettled her.

Thanks. I am so happy!