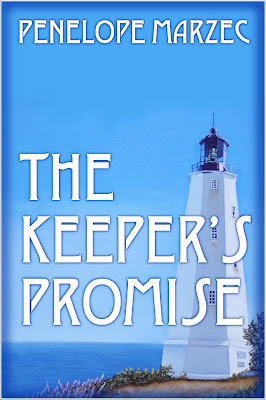 THE KEEPER'S PROMISE was an EPPIE Finalist in 2009. The story is set in Shucker’s Point, New Jersey, where Jack St. Marie, a well-known research scientist, is missing. Trooper Bryce Johnson believes the worst of Jack’s wife, Evie. In high school, Bryce loved Evie--enough to want to marry her. But that was before he witnessed her phone in a bogus bomb scare. And only two months before Jack disappeared, Bryce saw Evie aiming a gun at her husband.

In the following scene Bryce sees Tommy walking alongside the road. Bryce had arranged for Tommy to work out his community service at the lighthouse where Evie is the park ranger.

With an effort, he went back to his patrol car and headed off to the festival grounds where he would be redirecting traffic. On his way, he saw Tommy walking alongside the road. The kid looked neat for a change and Bryce wondered why. He stopped the car and opened the window.

"I heard you were walking along 553 last night with a lawnmower that looked a lot like the one at the lighthouse."

Bryce lowered his brows. "Where can you get lawnmower wheels on 553?"

The kid glared back at Bryce without flinching. "From a friend."

"You stole them." He kept his voice firm, but low.

Bryce tightened his mouth into a threat. Obviously, there was something shady going on. "So you 'found' the right-sized wheels?"

"She ain't got extra cash."

At that moment, staring into the face of the wiry young man, Bryce sensed the kid's inherent loyalty. Tommy liked Evie and trusted her. Most likely, he would not rob her, or hurt her--and Bryce felt himself relax--though only marginally, for Tommy could never be considered entirely trustworthy. He did break another kid's nose. However, Bryce had a hunch that Tommy wouldn't hurt Evie--though he might enjoy taking at swing at Bryce, given the opportunity. He could feel the animosity directed toward him in Tommy's scowl.

"Why didn't you show up yesterday at the lighthouse?"

"I did, but there was an ambulance and a lot of confusion. I knew what I was supposed to do--mow some more grass in that area behind the shed--but one of the wheels kept falling off the lawnmower. It drove me crazy."

"If you got there when the ambulance was there, you were very late."

"You are supposed to be on time."

"Pastor Strauss asked me to help with the church's festival booth."

"You were only there for an hour."

Tommy's eyes narrowed. "You got somebody spying on me? I had to walk from there to the lighthouse."

"You could have taken a shuttle bus."

Tommy's face clouded. "The people on the bus would have looked at me like I was some kind of lowlife."

Bryce set his mouth in annoyance. The kid would always have an excuse. "Where's the lawnmower now?"

Tommy kicked at a stone near his foot and sent it skidding along the road. "I-I cut the grass for my mom this morning, and I replaced the gas I used."

"I siphoned it out of my stepdad's car. Mom said I could."

Bryce knew the stepdad had lost his license. "If you walk the lawnmower back to the lighthouse, you'll probably be late again."

Bryce looked at his watch. "I can pick you and the lawnmower up and take you both to the lighthouse today."

It was an accusation and Bryce felt the sharp edge of Tommy's words like a deep cut to the flesh as he remembered Evie's words from only a few minutes ago.

You paint everyone with a broad brush. I was reckless and wild for a while when I was seventeen and that's the way you'll always see me. Tommy hasn't got a chance. Has he?

Bryce felt himself bristle. He had to be tough. On the other hand, he reminded himself that he should not be stereotyping people. He needed to be fair. Carefully weighing his words, he told Tommy, "I want you to make something of your life and you need to start by showing the judge how responsible you are. Things will go easier for you that way."

Tommy's laugh had a harsh note of cynicism in it. "It ain't never been easy for me."

Bryce's grip on the wheel tightened. "I have been willing to help you out. I've already stuck my neck out for you by getting you the job at the lighthouse in the first place."

Tommy kicked at another rock. "Yeah. So I owe you."

Bryce took that as thanks of a sort. He relaxed a little. "You look good today. Clean and neat."

"I was gonna meet someone."

"Is that someone a girl?"

"Yeah. When I was too dumb to know better."

"When did you break up with her?"

"When Greg Howland told her she ought to stop hanging around with me."

"Yeah. So I busted his nose, but I got the last laugh anyway."

"I guess she likes older men."

"Or at least their money."

Bryce nodded. The kid had learned a lot in his seventeen years. Most of it the hard way, no doubt.

Tommy pointed at the white building down the block. "Do you...ah...do you know when everyone gets out of that church?"

"It varies--depending on how long Pastor Strauss talks. You still have time to join them."

Tommy shook his head. "I wouldn't know what to do."

"You could start by just listening," Bryce suggested.

Tommy pulled a small Bible out of his pocket. "I thought I'd start by reading this."

A shadow fell across Bryce's heart. The sight of the Bible seemed to convict him. He hadn't been acting much like a Christian lately. True, he hardly felt like one anymore, but he knew his attitude this past week had been unyielding toward Tommy while others had seen the potential in the kid--most notably Pastor Strauss.

"Mrs. St. Marie told me she read one like this in a month."

Bryce sighed. That was just like Evie. Impulsive. When she embraced something she did it in a rush. "I think it's better to take each small part of it and think about it--go through it slowly." When was the last time I picked up the Bible? Six months ago? When did I stop feeding my soul?

Tommy fingered the gold letters on the cover of the small volume. "Maybe I'll sit down in the park over there and start reading. I could still see when the doors to the church open up and everyone comes out."

"There's doughnuts and coffee in the basement afterwards."

"Why do they give away so much free stuff?"

"Maybe you'll find the answer in that little book."

Tommy frowned at the Bible as if he couldn't quite believe what Bryce had told him.

"I'll stop at your house to pick you up at two," Bryce said.

"Yeah." Tommy walked away heading toward the town's small park.

Bryce slid the window back up and turned on the air full blast. He only had a few more minutes to enjoy it before he would be standing outside in the heat directing traffic. He would use his lunchtime to get Tommy to the lighthouse.

I know I am not seeing the goodness in people anymore. Tommy's had a hard life. I should cut him some slack. Evie, too. Why can't I ever get it right when I talk to her?

Bryce wanted an end to the misery. He wanted to wake up with a heart that didn't feel as if it had lead weights attached to it. Being married to Jack St. Marie must have been a nightmare for Evie. The thought of the man brutalizing her had Bryce squeezing the wheel in his hands in a crushing grip.

If she didn't kill her husband who did? And who had tried to kill her?


You can read more of THE KEEPER'S PROMISE at Amazon.