Once Upon a Time in Tin Pan Alley 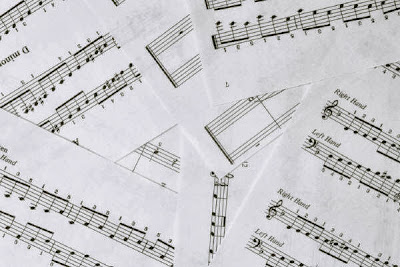 Hubby first learned how to play ragtime a long time ago--way before I met him. He searched out collections of Scott Joplin's music in the New York Library, but discovered some songs were not included in the collections because the music publisher, Jerry Vogel, held the copyrights.

In his searching for more ragtime music, hubby discovered another publisher printing the songs only Jerry Vogel was entitled to publish.

Hubby took it upon himself to report this to Jerry Vogel who had a store in NYC.

Mr. Vogel appreciated hubby's report and informed hubby that he would sue the other publisher and give hubby 10% of the proceeds. Hubby declined the offer. So instead, Mr. Vogel said he would give him the money as a wedding gift when he got married. As I said, hubby didn't even know me at that point.

However, when hubby and I were married many years later, we received a check from Mr. Vogel and for years afterward, until Mr. Vogel passed away, we received a gift box of paper products at Christmas. (We figured Mr. Vogel had stock in that company.)

The moral of the story--report pirates, not because you'll get a reward but because it's the right thing to do. Also, don't be a pirate. Pay for the music and books you enjoy. Somebody worked hard to produce it.
Posted by Penelope Marzec at 10/11/2013 09:43:00 AM

I looked him up on Youtube. I've heard almost all those songs before!

Jerry Vogel's motto: The Old Songs Are the Best Songs.

I think he was right because the old songs have stood the test of time.