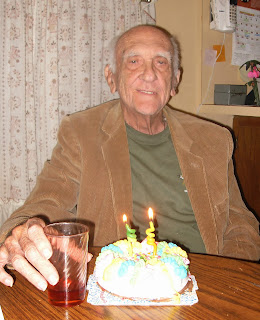 Yesterday was Dad's 92nd birthday. We celebrated. I made lasagna because it's soft and he likes cheese. Lasagna is a lot of work, but I like it, too. I bought a little ice cream cake. ("Why didn't you get straight candles?" he asked.)

When it was all said and done I asked if he thought we had feted him enough.

Everyone gave me a strange look.

I turned on the iPad, hurried to Dictionary.com, and discovered that I was indeed pronouncing it incorrectly.

Fete is pronounced just like the word fate, but fete and fate have entirely different meanings.

Fete is of French origin and it comes from the eighteenth century. It is a day of celebration. :-)

While I didn't pronounce it properly, I had the correct meaning.

That's one of the problems with being an avid reader. I am familiar with plenty of words, but I have never heard anyone speak them. Most people get by using very few words. Party is a far more popular word than fete.

So I say we should all prepare a fete instead of a party. Let's party like it's the eighteenth century.

(PLEASE MAKE YOUR BLOG WORD VERIFICATION FREE. This will make it much more inviting to leave a comment on your blog. Deciphering verification words is annoying and nearly impossible. Change your comment setting to "Registered Users" and you'll be safe from SPAM. Thanks.)

Thanks for the tip. I'll try registered users. :-)