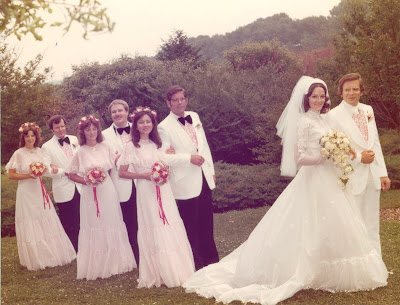 On Wednesday, it will be thirty-seven years since hubby and I said our vows. After the ceremony at the church, the wedding party went to Holmdel Park where the photographer arranged us in formal poses in the arboretum. It was an overcast day, but at least it did not rain while we tramped around in the grass.

Since it was the bicentennial year, I had thought a red, white, and blue theme for the wedding party would be a fabulous idea, but hubby thought it would be a bit much. On further consideration, I decided he was right.

The bridesmaid dresses were white with small, red polka dots. They wore red and white flower crowns. They carried red and white bouquets. The men had red-edged ruffles on their shirts.

Red has always been my favorite color, but blue runs a close second.

Thirty-seven years have gone by in a flash it seems, but I am always glad hubby and I found each other.

You're just a bit ahead of me, Penny. That time did fly, didn't it?
Ronnie

When I look back, everything seems to have happened in the blink of an eye. We were constantly busy--and still are. There's always stuff to do.

Congrats to you and your husband!