I got a haircut after watching that wedding video. My hair now looks nearly the same as it did twenty years ago. Daughter #1 told me that I will not look twenty years younger with the haircut. I told her it doesn't matter because I will feel twenty years younger--or at least a little younger than I am now. Besides, in this heat, it is good to have shorter hair.

We went to visit daughter #2 today. We helped her move out of her dorm and into an apartment last week. (We do an awful lot of moving.) Her apartment is only a few blocks away from the apartment where her father grew up. Hubby was delighted to show us his old haunts. He took plenty of photos, too. 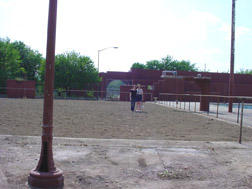 Here's a photo of me and daughter #2 standing in what used to be the diving pool where hubby cooled off. It was sixteen feet deep. However, it has been filled in with dirt. Such is progress.
Posted by Penelope Marzec at 8/02/2005 09:03:00 PM

Going back and visiting old haunts can be fun and heartbreaking. It's amazing how things change, and not always for the better.

Every once in a while I take a ride around my old neighborhood. Of course I can only do that during the day now. That doesn't make it any safer but it does make it easier to identify the muggers.