Sunset at the Park 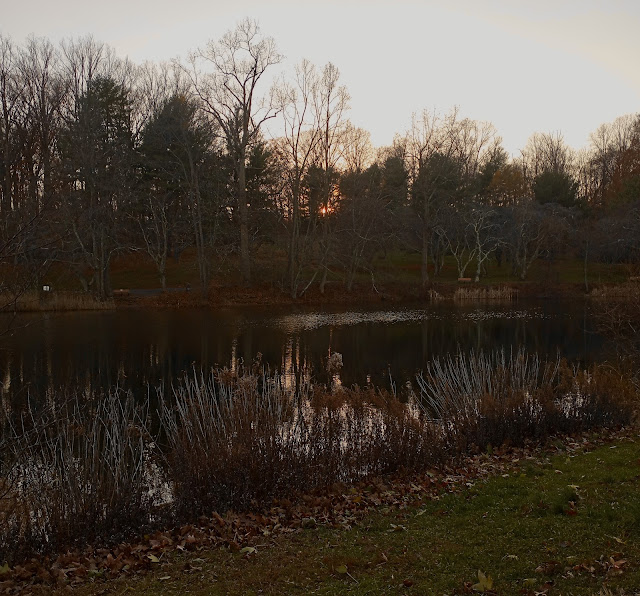 I took this photo at 3:50 p.m. at Holmdel Park. The sun was on its way down. There were no ducks and no geese in the lake. It was chilly, though not freezing. There were very few people walking in the park except for the hardy ones out to get some exercise before it grew totally dark or those walking their dogs.
I was walking with hubby. Both of us wore hats and gloves. One man walking his dog stopped for a minute to tell us how much he likes seeing couples walking together. Hubby chuckled and told him that I was walking the dog. The other fellow laughed and continued on his way.
We stopped into the shelter building to warm up. The huge fire in the fireplace was wonderful. One man, who was probably colder than we were, stood directly in front of the fire for a while holding out his hands to warm them.
The fencing is up around the sledding hill, but it might be a while before we get any snow. When there is some, there will be plenty of children with their parents lining up to slide down the hill and the shelter building will be packed with people warming their frozen fingers.
But right now there's not much incentive to go to the park. It's dark. The loss of daylight is a sad thing. No wonder the ancients were so happy when the light began to return at the Winter Solstice. It is something to celebrate.
Three weeks to go!
Posted by Penelope Marzec at 12/01/2022 08:54:00 PM

Labels: a cold winter walk in the park

Thank you for this wonderful post, I want to use this opportunity to share about My life and how I struggled with Hiv/Aids Disease before the Lord Jesus in my life as a candle light in the darkness. You showed me the meaning of faith with your words. I know that even when I cried all day thinking about how to recover, you were not sleeping, you were dear to me. I contacted the herbal center Dr Itua, who lived in West Africa. A friend of mine here in Hamburg is also from Africa. She told me about African herbs but I was nervous. I am very afraid when it comes to Africa because I heard many terrible things about them because of my Christianity. god for direction, take a bold step and get in touch with him in the email and then move to WhatsApp, he asked me if I can come for treatment or I want a delivery, I told him I wanted to know him I buy ticket in 2 ways to Africa To meet Dr. Itua, I went there and I was speechless from the people I saw there. Patent, sick people. Itua is a god sent to the world, I told my pastor about what I am doing, Pastor Bill Scheer. We have a real battle beautifully with Spirit and Flesh. Adoration that same night. He prayed for me and asked me to lead. I spent 2 weeks and 2 days in Africa at Dr Itua Herbal Home. After the treatment, he asked me to meet his nurse for the HIV test when I did it. It was negative, so I asked my friend to take me to another nearby hospital when I arrived. I was overwhite with the result, but happy inside of me. We went with Dr. Itua, I thank him but I explain that I do not have enough to show him my appreciation, that he understands my situation, but I promise that he will testify about his good work. Thank God for my dear friend, Emma, I know I could be reading this now, I want to thank you. And many thanks to Dr. Itua Herbal Center. He gave me his calendar that I put on my wall in my house. Dr. Itua can also cure the following diseases, HIV, Herpes, Neuromuscular Diseases , Hepatitis B, Inflammatory Liver, Diabetes,Inflammatory bowel disease ,Fibromyalgia, recover your ex. You can contact him by email or drituaherbalcenter@gmail.com, ..www.drituaherbalcenter.com .. He is a good doctor, talk to him kindly. I'm sure he will also listen to you.