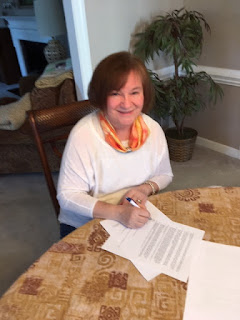 My guest today is Kathleen Neely, a retired elementary principal who enjoys time with family, visiting her two grandsons, traveling, and reading.

She is the author of The Street Singer, Beauty for Ashes, The Least of These, Arms of Freedom, and In Search of True North. Kathleen won second place in a short story contest through ACFW-VA for her short story “The Missing Piece” and an honorable mention for her story “The Dance”. Both were published in a Christmas anthology. Her novel, The Least of These, was awarded first place in the 2015 Fresh Voices contest through Almost an Author. She has numerous devotions published through Christian Devotions.

Kathleen continues to speak to students about writing and publication processes. She is a member of American Christian Fiction Writers. 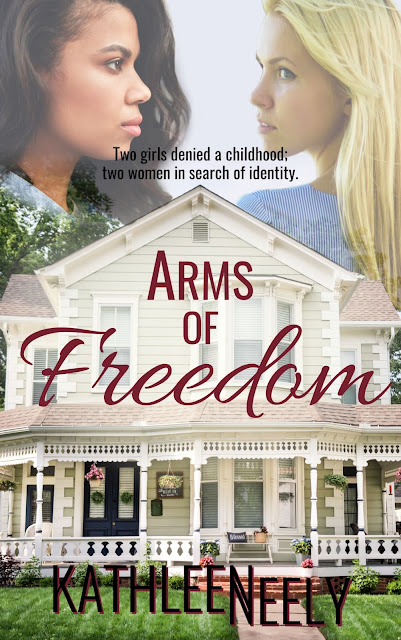 With each page of the age-old journals, Annie discovers all that unites her with a woman who once lived in her farmhouse. One lived with wealth and one with poverty, but both knew captivity. Both longed to be free.

Miriam yearns to escape her life as a super model. She drops the pseudonym and uses the name she gave up years ago—Annie Gentry. Then she alters her appearance and moves to rural South Carolina to care for her grandmother. Can she live a simple life without recognition? Can she hide a net worth valued in the millions? Love is nowhere in her plans until she meets a man who wants nothing more than Annie Gentry and the simple life he lives.

Charlotte lived in the same farmhouse in the tumultuous 1860’s. The Civil War was over, but for a bi-racial girl, freedom remained elusive. She coveted a life where she wouldn’t bring shame to her family. A life where she could make a difference. As she experiences hope, will it be wrested from her?

The journals stop abruptly with a climactic event, leaving Annie to search for information. What happened to Charlotte? Did her life make a difference?  Did she ever find freedom?

Intrigued? Read an excerpt to find out more.

The key turned in the lock, but the attic door still required a strong arm to open it. Years of dried paint scraped the door jamb. The bottom rebelled against the threshold, clearly in need of a carpenter to sand it down or re-align it. She propped it open, hit the light switch and immediately met years of stagnant air. A musty smell caught in her throat activating a gag reflex. She coughed, then hoisted the cardboard boxes to shield her nose and mouth. As the still air began to dance in its new freedom, the disturbed dust mites floated in dull light beams. She’d have to deal with this sometime. She’d take the boxes and drop them upstairs. The attic needed a good airing out before she could look around. With the boxes held high in her arms, Annie climbed the steep wooden stairs.

The dim light cast shadows, enough to know that the room wasn’t empty. Annie plopped the boxes down and felt along the wall for another light. Instead, she found a string dangling from a single bulb mounted on the ceiling. She tugged the string and the room came to life revealing a lightly-cluttered attic. Sheets covered surfaces in their attempt to protect them from years of dust. Her initial inclination was to leave this for another day. Or another year. Low priority with all she had to do.

Yet something compelled her to stay. A few boxes and a storage chest. You would expect those in an attic. But a large section of the room held an air of familiarity. Children’s furniture had been stacked against one wall. A wooden table, four chairs, two turned upside down to nest on the other two, and a bookshelf. A carpet, about six-foot square, spread out on the floor in front of the furniture. Why was everything so familiar? She had only visited here twice when she was around five years old. And she was certain she’d never been in the attic. Eleanor would not have allowed it.

Annie opened an old chest that sat on the carpet. She lifted the dusty lid and saw the toys, mostly wood and metal. A toy tea set, a sorry looking stuffed teddy bear, and wooden building blocks with faded alphabet letters. A smaller chest sat beside it. She picked up a yo-yo, the string discolored and stiff, marbles in a cardboard box, a metal spinning top, void of color. These were definitely old, perhaps antiques. She lowered the lid, puzzling over this discovery. Another box held two items, both wrapped in cloth. She lifted one and removed the flannel to discover a baby doll. An image formed in her mind. She had seen this doll. She was certain of it. She could see a vision of the doll sitting on one of the wooden chairs. She knew she’d find another when she unwrapped the other flannel—one with red, curly hair.

As she unpacked the second doll, it all came back to her. A picture. She’d seen the items in a painting at Nana’s home, the home she had in Pittsburgh before she moved to Roswell House Assisted Living. The painting mirrored Andrew Wyeth’s style of down-home realism with rustic details. The table and chairs on the same carpet where Annie stood today, the tea set in the center, and two dolls seated with teacups before them. The gritty window in the background of the picture with its yellow-gold curtains matched the window a few feet away. The gold had faded to a drab shade and held years of dust, but it was the same curtain. The same window. That meant a child’s play area had been in this attic. Why would anyone set up a playroom in an attic? Or perhaps this space served as an artist studio, the dolls and tea set staged for a picture. But another thought marched to her brain. Her grandmother’s words. Those walls hold secrets.

You can find ARMS OF FREEDOM at:

Kathy, this sounds so good. I bought my copy and can’t wait to start reading it.

Thank you, Carol. I hope you enjoy it.