Guest Post: COOKING UP A MYSTERY, by Gail Pallotta

My guest today is Gail Pallotta, a wife, Mom, swimmer and bargain shopper who loves God, beach sunsets and getting together with friends and family. A 2013 Grace Awards finalist, she’s a Reader’s Favorite 2017 Book Award winner and a TopShelf 2020 Book Awards Nominee. She’s published six books, poems, short stories and several hundred articles. Some of her articles appear in anthologies while two are in museums.

Gail's latest book is COOKING UP A MYSTERY! Here's the blurb:

Laney Eskridge worked to put her husband through dental school. Then he left with another woman. Laney is on edge from the emotional scars and her parents' deaths. Then she hears unexplained noises in her new tea house, and her anxiety is tripled. Add a budding romance with Eric—a guy with a fear of commitment—and it's all too much to handle. She cuts ties with Eric and plunges into making her business pay off.
When Eric discovers that Laney's in danger, he vows to protect her. But can he make a lasting promise? Will she trust him? . . .and when they overhear a threat that could cause national turmoil, will anyone believe them? There's more brewing than herbal tea in Cooking up a Mystery. 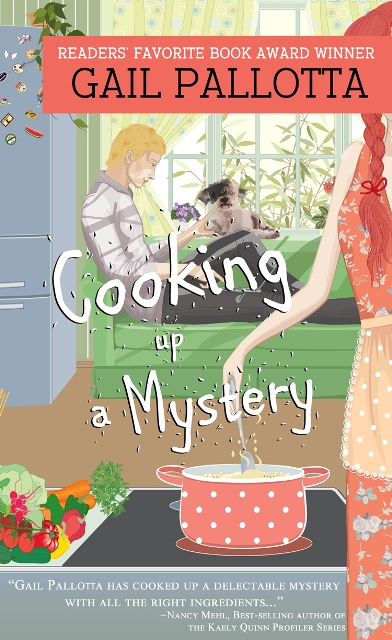 And now for the excerpt! 😉

Eric pointed at the picture of the man riding the huge tricycle. “Is that it?”
The sound of several pots clanking one right after the other drifted into the dining area. Did he not hear the racket? Laney opened her mouth to ask, but snapped it shut. The last thing she wanted to do was say she heard a commotion when there was none. Eric would think she had a bad psychological problem. She put her hand over her mouth. Did she? “Yes, but go ahead and eat your cookie.” She jumped at the sound of more bonks. She would’ve sworn someone ran into the trashcan in her kitchen, not out back. She gazed at Eric. He munched as though nothing distracted him. She had to ask. No! Thuds pounded the floor in the kitchen. Laney was sure of it. Eric had to have heard them. She opened her mouth.
“About the painting, I believe you said one of your customers gave it to you.”

Oh wow! Sink dish washing. I'm lost in the suds, but I appreciate your stopping by to read about Cooking up a Mystery.