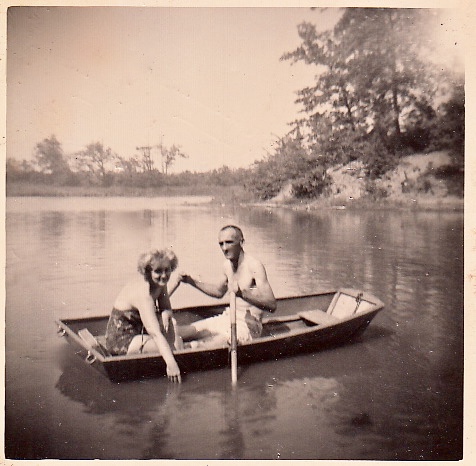 My mother and my father posed for this photo in 1961. They were rowing on Treasure Lake, which was behind our house. The little dinghy, which we had christened "Scout" with a bottle of 7Up, provided endless hours of summertime enjoyment for all of us. 1961 wasn't a particularly peaceful year for the world. There was the failed Bay of Pigs invasion. The Berlin Wall was completed. President Kennedy urged everyone to build fallout shelters. My father shrugged at that. We lived across the bay from New York City. He figured NYC would be bombed and we would perish instantly--so there was no point in building a fallout shelter.

But all the trouble in the world didn't seem as close back then. My father was a journalist so I knew what was happening but I wasn't bombarded with it constantly. I was happy. We rowed around the lake in our little dinghy. We caught fish and turtles. We played with the neighborhood children. My mother baked cookies, cakes, and pies. We swam at the beach. In the evening, we'd build a fire and toast marshmallows.