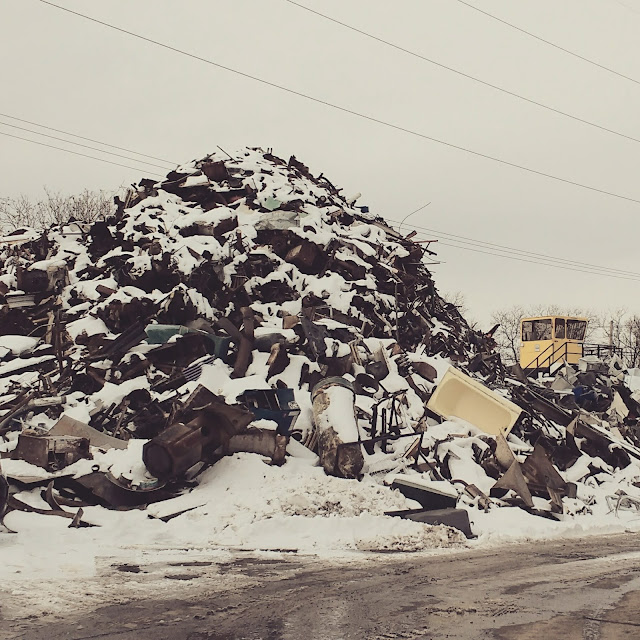 I drive an aging Jeep. I love it even though it guzzles gas. It's a useful vehicle for hauling stuff, but it's especially comforting to drive in the snow. After the last snowstorm, I noticed the rear tire was very low. We stopped to put in air. The air didn't help. That was rather disconcerting.

Our local tire repair mechanic fixed the leak but said it was caused by the rusty rims and warned that the repair wouldn't last. He suggested a recycling facility which might have rims for the aging Jeep.

Hubby and I went to the recycling center. On one side of the street was a mountain of rusting metal appliances. On the other side of the street were stacks and stacks of flattened automobiles. In the old days, it would have been called a junkyard. Hubby loved it. I thought the entire complex had an post apocalyptic feel to it, loaded as it was with the refuse of our consumerist society.

We bought two rims for a very fair price. The rims came complete with busted tires. We loaded them into the back of the Jeep. Our tire repair mechanic replaced the rustiest rims of the Jeep with the newer rims. Now I'm ready for the next snowstorm.