Please Turn Off the Television in the Waiting Room 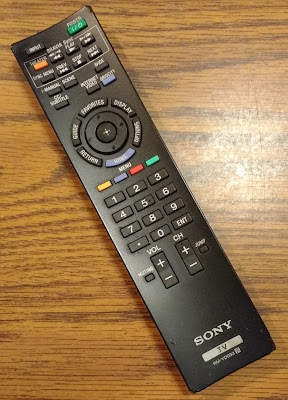 For a few decades now, whenever I must spend time in a waiting room, there is a television blaring away in a corner. I always want to turn it off, but most often other people are also in the room and most of them sit and stare at the screen. I always have a book to read--either a paper edition or another book in my cellphone app. I find the constant, inane chatter from the screen annoying.

There are usually old magazines lying about on tables in waiting rooms, but in general they are the same ones that were there a year ago.

I think it would be a wonderful idea if the television sets in all waiting rooms were turned off. Doing so might encourage people to read. Especially if some newer magazines were left on the table and perhaps a few books as well.

I totally agree about waiting room TV's. Even if it's something I might watch (like the cooking channel), it's always way too loud. When I know I have to be trapped in a waiting room, usually I bring a few magazines, and when I get done looking at the pictures in my decorating/cooking magazines or clipping a recipe, I always leave the magazine there. That way they have fresh ones and someone else can enjoy them. It always seems weird to me how people have the TV blaring 24 hours a day. My mother couldn't sleep without hers on. I used to creep in their room and turn it off and she'd always complain in the morning. In those days there were no remotes. No matter how smart you are, I just don't think it's possible to work and have the TV on. Maybe cook dinner, but to me that would also just be chaotic noise. Even sometimes music bothers me. Noise makes it hard to hear inside your own head, which creative/psychic people like. People nowadays are just too used to the TV as their baby sitter, and it's a shame. It's probably why most people have no interesting thoughts or conversation, but that could just be here in Los Angeles.

I like the idea of leaving fresh magazines behind. That might help. I also agree with you about the noise making it hard to hear inside your own head. I sometimes turn on music when I'm cooking, but I never have the TV blaring away in the background. The television is a very poor babysitter.

I always take my computer and try to sit as far as I can from the TV. Our doctors' offices have a closed circuit thing (or something) that is health related - low fat, low salt cooking, other health stuff. One day my husband I were both there and we sat under the screen so it wouldn't distract us, but when they had an "ad" for some testosterone cream and the side effects and cautions came on, I nearly started laughing - women should not touch this cream, pregnant women should not touch the part of the body where the man has used this cream, children should never to allowed to touch the cream, nothing that can touch a child should be used to touch the part of the body this cream is on....It was all so specific and odd. Everyone was looking that way so I didn't laugh or even look up from my computer but I thought, why in the name of all things chocolate would ANYONE want to use this stuff!?! I suppose some of the information on that system is good but when you have to wait for awhile, it loops and then it's annoying.

Oh my! Some advertisements are just wrong. :-(

The fact that the whole thing loops after a while would drive me insane. Turn it off!

As long as it's not too loud. Dead silence is kinda creepy. Also, usually, the music played in dentists offices is weird.

Dead silence is rare--especially in a doctor's waiting room. I agree with you about the music in dentists' offices. It doesn't help at all. :-(