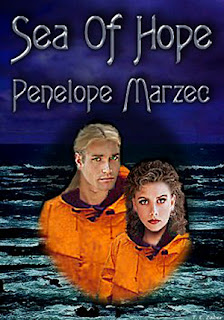 The following scene opens in a hospital. One of the crew members on the fishing boat, the Merrichase needed an emergency appendectomy. The fishing boat had belonged to Doria's father, but he willed it to Murray--not to his daughter, Doria. She joined on as a crew member for one last trip...


Then, from somewhere above her she heard Murray's voice shouting.

With her heart still racing wildly, Doria opened her eyes and blinked against the bright white lights overhead.

"What was that nightmare all about?" Murray asked.

Groggy, she fought to focus her gaze. When it dawned on her that her head lay in his lap, she sat up in horror and slid quickly to the other side of the vinyl-covered sofa.

Murray had the audacity to laugh. "You were the one who snuggled up to me like I was a pillow."

Doria shoved her curls back. "What time is it?" Her voice came out sounding hoarse and her tongue stuck to the roof of her mouth.

He glanced casually at his watch. "About noon." The brows over his bloodshot eyes rose. "By the way, it's Tuesday, we're in a hospital in Virginia Beach, and Chad is in recovery. He'll be fine."

A small sigh of relief escaped her lips. She hated Chad, now; despised him for what he had done. But she hadn't wanted him to die. His appendix had ruptured before they docked, making the last hour of their journey a desperate race that had become a blur in Doria's mind. She tried to rub the sleep out of her eyes.

As soon as the Merrichase had been secured, they had taken a wild ride in the ambulance to the hospital. When Chad had lapsed into an unconscious state, she had become hysterical, believing that he had passed away. Murray's arm had come around her to soothe her and she had been so crazy with fear, she had allowed him to comfort her. She felt her cheeks blaze with embarrassment as she remembered her panic.

Murray told her that the paramedics had given Chad something to take away the pain and let him sleep. She could have guessed that herself if she'd been thinking properly, but she'd become so distraught.

"So are you going to forgive him for starting that rumor?" Murray asked as he scratched his chin and yawned.

"Never." She sat up straighter and tried to sweep the wrinkles out of her flannel shirt and her jeans. She cleared her throat. What she needed was a large cup of coffee.

"Why not?" His expression grew hard as granite as his lips thinned.

"Because I hate him." Despite the savagery of her reply, Murray didn't blink. His eyes stared at her, cold and remote, as dangerous as the deep fathoms of the ocean.

"I see," Murray commented mildly. "I assume he played a large part in your nightmare?"

Doria froze. Oh yes. He had heard her scream in her sleep. She ignored his question.

"I'm going back to the Merrichase," she said as she stood up. "I'm sorry for -- for falling asleep on your lap." She could feel the flush warming her cheeks.

He flashed a sudden, devastating smile. "My pleasure."

Her breath quickened. She turned her head away in shame. Why did this have to happen to her?

"Aren't you going to go in and say 'hi' to your former sweetheart?" he chided.

She whirled as hostility flashed through her. "He never was my sweetheart and I don't want to speak to him ever again. How could he do that to me? I have never been pregnant! I have never even -- " She stopped herself in time. She surprised herself with what she had been about to reveal and the silence in the room lengthened uncomfortably.

"That's none of your business," she blurted out.

He cleared his throat. "Right." Getting off the sofa, he headed to the door. "Come on. We'll check on Chad and then go back to the ship."

Doria narrowed her eyes. "There are nurses who can check on him."

His green eyes had a lethal quality that sent a shiver of fear racing through her. "We won't be long."

Doria decided on a counterattack. "You can't go walking through this hospital. You look terrible. You need a shave."

"Do I?" He drawled. "And you, my marsh mallow bloom, smell like a fishing boat."

That comment set off the sparks again as Doria seethed with fury. "What do you expect? George and I got stuck putting all those porgies on ice." Then she frowned. "Hey. Where is George?"

"Supporting the local phone company." The cynical twist to his smile marred his handsome profile. Her fingers itched to touch it and erase the cruel quirk that kept his features from perfection. It annoyed her that she should care.

"I think we'll have to take all those porgies to New York to get a decent price," he continued.

Doria's breath caught in her throat as the sight of that thirty-foot wave in her dream terrorized her thoughts.

"W-what's the forecast?" she asked, nearly choking on the question.

"The same," he responded roughly.

Doria swallowed hard. It had only been a dream after all. The Merrichase always made it back to Port Harbor. Always.


CLICK HERE TO READ THE BEGINNING OF THE BOOK AT AMAZON.