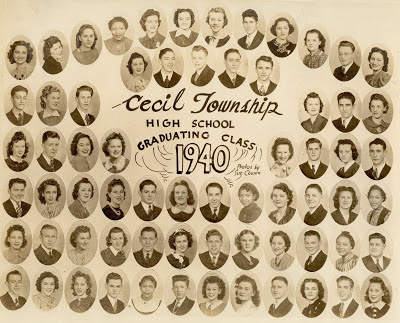 Cecil Township is in western Pennsylvania. Mom is in the second row from the bottom, the third student from the left side. My mother has such curly hair in the photo! Her hair was naturally straight. Since most of the young ladies have curly hairstyles in this class picture, I assume curls were in vogue.

Mom kept in touch with a few of her classmates. There were some reunions, but as she grew older she could no longer attend the event, the town was about four hundred miles away from where my parents lived. That is one of the reasons why I think social media is a great invention. Keeping in touch is so much easier. Sharing photos is a breeze.

Mom went to art school after high school. Then she joined the Marines and spent World War II in California. Afterwards, she came back east. She was working in a photography studio in Jersey City when she met my father.

It would be interesting to know how the rest of her classmates fared after they graduated.
Posted by Penelope Marzec at 1/25/2013 11:34:00 AM

I always say: Facebook is good for finding old friends, blogging is good for making new ones"
I moved when I was in 11th grade, so I graduated from a school I only went to one year, and never got invited to the reunions from my "main" high school. I lost touch with everybody till Facebook.
HAVE A GOOD WEEKEND!!!

You are so right--except not everyone is on Facebook. There are people my age who never adapted to the internet--or who fear Facebook. But I'm glad you were able to get in touch with your old friends. It must have been tough moving when you were in the 11th grade.