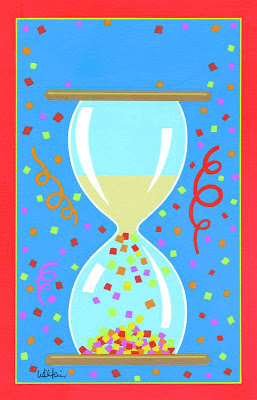 Tempus fugit. Time flies. (Or flees if you're concerned about the original Latin translation.) 2012 is history. 2013 presents opportunities. A whole lot of luck would be a nice thing to own, but it is something I don't count upon. If I want to get another book published, I have to write it, edit it, present it to editors, get rejected, and keep plugging away at the book until someone decides it is worthy of their publishing house. Or I can publish it myself, a wonderful option but it requires even more effort because then I am responsible for everything!

In 2012, I happened to catch a post announcing that the Prism Book Group was looking for manuscripts. I never heard of them until that point, but I decided to give them a try and they decided to give me a contract for Daddy Wanted.

That was either luck, a happy coincidence, an answer to prayers, or some sort of cosmic karma thing where the stars lined up just for me. I don't know--although I prefer to think God is listening to me, watching out for me, or trying to direct me. (Which is, I'm sure, a nearly impossible task.)

My mother, the daughter of immigrants, was extremely concerned about luck. Steeped in the traditions of my grandparents' old ways, she kept the rituals she felt would guarantee her a fine future. Though she was intelligent, she feared letting go of the ancient customs that had been handed down to her. Therefore, Mom roasted pork every New Year's Day but even more important to her was the poppyseed roll. If we did not have a poppyseed roll, she knew the coming year would be a disaster. When she became too frail to bake a poppyseed roll, I baked them--or bought them.

We often complained to Mom about some years that were very difficult. She warned us that things would have been worse if we had not eaten the poppyseed.

We will be eating pork today. We will have poppyseed rolls, too, which I purchased for an exorbitant amount. The rolls won't taste as good as homebaked, but I saved myself some time in the kitchen.

I know there will be good times and bad times this year. One special meal isn't going to change things. I know I have to glue myself to the chair and type out as many awesome stories as possible if I expect to get anywhere in the book business.

Still, I will be thinking of my mother when I put that poppyseed roll in my mouth. And maybe, just maybe she can shine a little love down on us as we sit around the table. That would be worth more than luck to me.