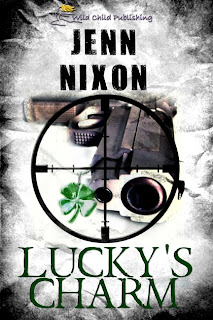 Today I am offering a special feature! One of my author friends, Jenn Nixon, has had a new book released, Lucky's Charm. Jenn’s love of writing started the year she received her first diary and Nancy Drew novel. Throughout her teenage years, she kept a diary of her personal thoughts and feelings but graduated from Nancy Drew to other mystery suspense novels.

Jenn often adds a thriller and suspense element to anything she writes be it Romance, Science Fiction, or Fantasy. When not writing, she spends her time reading, observing pop culture, playing with her two dogs, and working on various charitable projects in her home state of New Jersey.

Here's the blurb for the book Lucky’s Charm:

To protect her family and find a killer, Felicia “Lucky” Fascino assumed her adoptive father’s identity and joined the network, an organization of moral assassins to finish the job he began. Eliminating the man responsible for murdering her mother has consumed her for the last five years. While keeping her Uncle Stephen and cousin Elizabeth at arm’s length, Lucky begins to feel the weight of her career choice and reclusive lifestyle. Then a chance encounter with an enigmatic hit man, during one of her jobs, turns into a provocative and dangerous affair. Distracted by the secret trysts with Kenji Zinn and mounting tension within her family, Lucky makes reckless mistakes that threaten her livelihood and almost claim her life.

Lucky learns her uncle is retiring…

When Lucky decided to step into her father’s network shoes, one stipulation had been telling Bet. Although she wasn’t pleased to learn Lucky killed people for a living, Bet eventually accepted the truth.


During the last year, Bet integrated herself into network conversations and privately mentioned suspecting her father had been into something shady for a while. She’d been right. However, the more she learned about what Lucky did, the more she’d want to know. Always a cousin first, Bet was big on family and didn’t mind shoving her nose in everyone’s business. The reasons were simple: a family had to stick together. Most families handed down a farm or at least a tax preparation business, but contract killing was way out in left field.


Family first. That was their expression, had been for years. Bet said it more than once: family doesn’t turn their backs on each other. Even though Lucky never told her the real reasons that she did what she did, Bet had always been there to help.


“There’s not going to be any trouble is there? I mean, do people quit from this business and live to talk about it?” Lucky glanced over at him. It was rare a contract killer made it to “retirement.” The cops found you because you got sloppy, someone else killed you, or like her father, it wore you down and diseased your body. Handlers had a certain amount of anonymity and better survival rates, but they were still at risk.


“The network likes to keep tabs on those who opt out, just for safety reasons, but there’s no reason to fear retribution from Ruddy and his partners or other contractors. He knows I’ve been thinking about it; the few I know won’t be surprised either. Some think we’ve gone soft because of the earlier jobs I’ve turned down for you.” He pressed his lips together in a tight smile.


“Hey, don’t give me shit; you know how I feel about those scrap board jobs.” She ran her finger along the edge of the shelf and turned back to the fire. “I’ve kept us in so we can keep digging, and I’ve made us a lot of money.”


“Luke was the same way. He wouldn’t take a job unless he felt justified.” He patted the spot beside him, and when she sat down, he wrapped his arm around her shoulders. “You have enough money saved to call it quits too.”


The thought had crossed her mind many times over the last five years. What would it be like to feel normal again? Stop killing and start living. Lucky had no idea. She was in so far, so deep, she didn’t know if there was a way out for her. Even if she did get “out,” what would she do? Contract killing didn’t exactly give you real-world skills to work in an office building or retail store.


It didn’t matter; getting out was a long way down the road. She still had an obligation to fulfill to the people who adopted, raised, and loved her. Questions needed answers. She and Phen hadn’t come close to those answers in all the years they’d been searching, but maybe his renewed focus could change things. Her life stayed on hold until she fulfilled her promise and gave her parents a bit of peace.


“You know I can’t quit,” Lucky said, resting her head on his shoulder. She allowed herself a moment of comfort from Phen; he was still her uncle, despite knowing what she had to do to keep that promise. “When you get me some solid leads and I find out who killed her, I’ll stop. Until then, Lucky lives.”

You can find Jenn Nixon at her website:
www.jennnixon.com

Thank you so much for having me!
~Jenn

Sounds like a good read. Most books with guns on the cover are good.

@Mark, guns make for an exciting cover don't you think? :-)

If you see a gun on the cover, you can be rather certain that it will be used in the story. :^)