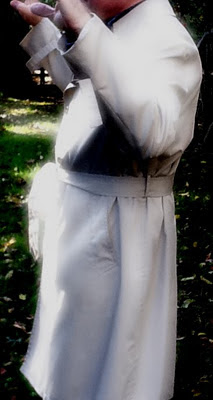 Ooh, I didn't even know there was such a thing. You told this story so chillingly, Penelope! I love it.

woo very Creepy, and chilli is like lady white.
Cheere

Way cool! Glad you told us!

And did you ever fine out what he was waving at? What is the story of the Parkway Phantom?? I'll have to google it.

For the record, there are varying accounts of this phantom. However, I saw what I saw. He was wearing the trench coat typical of the sighting, but he did not have a hat. He was waving in the odd manner others have reported. Some people say he's on the north side--but I saw him on the right hand side of the southbound lanes. Some say the sightings are only at night. I saw him during the day, but it was rather dark due to the inclement weather.

At any rate, it was a weird experience. I haven't seen him since then though I have driven past that point innumerable times.

I worked with someone who saw this man sitting on the toll booth barricade. My co-worker had called me the next day to tell me about it and like you said, he saw what he saw.

I was born and raised in Atlantic City, New Jersey and have lived here for almost my entire life except for a short stint in the Florida Keys. My mother and I have both driven on the Garden State Parkway quite often and I have never heard of the Parkway Phantom. How interesting, but creepy. Where can I find out more about it?

You can do a simple search on Google. Type in Parkway Phantom, NJ. There are also references in several books about NJ. One book I own is Ghosts of the Garden State, by Lynda Lee Macken.

It has been many, many years since I saw the Phantom that one rainy day. I have not seen him since, which is okay by me. :^)