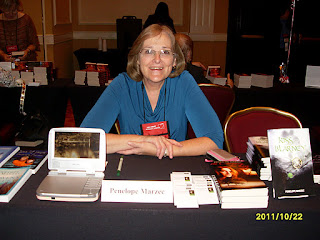 There I am, waiting for someone to buy my books at the New Jersey Romance Writers Conference Book Fair. Shelley Freydont took the photo for me. Thanks, Shelley. :^)

At the New Jersey Romance Writers Conference last weekend, the theme was “Empowering You Muse.” NJRW runs a terrific conference every year which offers inspiration, support, and plenty of nuts and bolts writing advice whether a writer is a novice or multi-published.

I took notes at most of the workshops I attended. However, in the interest of brevity, I am posting only the best of the best. Reading my notes will not make anyone a better writer. Writing makes better writers. Nevertheless, some may find a few useful nuggets of information here. One thing I cannot convey in this blog is the wonderful sense of camaraderie that is an integral part of the conference. Writing is a solitary endeavor—and just a little bit crazy, but rubbing elbows with other writers...well, it’s really nice to share your dreams.

On Friday, the conference provided a special retreat for published authors. Wine and chocolate-covered pretzels were served.

Eloisa James kicked off the retreat by giving an overall view of the publishing industry, which—as most people know—is going through major upheavals. Authors are expected to do far more in terms of promotion—particularly on Facebook. They are expected to engage their fans, but they must also post direct links to their books on Amazon. Getting Facebook fans to use the share button is important.

Comments on Amazon are imperative. Authors need at least fifty comments—good or bad—to make a difference.

After Eloisa’s talk, I sat in on a roundtable discussion titled BLOGS, TWITTER, AND FACEBOOK. The moderator was Suzanne Brockmann, who is a perennially enthusiastic author with plenty of great ideas of her own. She started her writing career before the internet became a factor in promotion. Her first book was the last book published by Kismet. She gave away many copies of her book to help establish her reputation as an author.

Much of the discussion concerned Facebook fan pages along with automatic connections an author can make to blogs, Twitter, and so forth.

There is now a conversion app that can change a Facebook friend page to a fan page. However, though the contacts are transferred, all other status messages and photos are lost. The “friend” page will also vanish. Therefore, all information should be backed up before starting the conversion process.

One author suggested offering a contest to get fans to switch from an author’s “friend” page to a “fan” page.

To get a blog to automatically show up on a Facebook page, the author needs her RSS feed (usually nameofblog/feed). Feedburner will do this for the author, as will Feedmyinbox. They dump the information for you.

Some authors consider Tweetdeck extremely useful. All of an author’s accounts can be set up at Tweetdeck. Hootsuite will time tweets automatically.

When it comes to giving away books in a contest, one author noted that it is far easier to give away her books on Kindle, rather than to mail paper editions.

Several authors suggested gathering their fans into a promotion team. Fans get a free book, bookmarks and other promotional items to hand out. The author puts these special fans’ pictures on her Facebook page.

Another author suggested including book club questions at the end of the book. Book clubs are a great promotional tool! Barnes & Nobles offers book clubs for their customers. Getting in touch with the store’s community relations person is the place to start.

A Facebook chat is a convenient way to get in touch with fans. Get other authors to join in but take other time zones into consideration so fans in Australia can chat, too.

On Saturday, I listened to WHEN ONE BOOK JUST ISN’T ENOUGH given by Lauren Willig. Ms. Willig said readers love a series. To them, it’s like going to a reunion. Editors also love a series because it’s much easier for them to sell.

There are several types of series:
Family Series
Friend Series
A Series Based on Geography, such as a small town.
A Thematic Series (with a fairytale line, or a spy link)
A Series With a Recurring Protagonist (this is tough to pull off in a romance)

World building is at the heart of a series. An author can personalize it and create recurring events along with recurring themes. However, the world should remain small with common places in each book. Keep the framework specific. Consistency is important.

For a series, an author needs a detailed record of everything. For instance, what time does the store in the small town open and close?

Readers must love an author’s people. Still, every book must be able to be read as a stand-alone book. All the characters do need not to be in every book. There should be no random reunions. In each book, each character must be there for a reason.

Secondary characters can turn into protagonists in the next book. The character’s basic personality should not change—that would disillusion the reader.

An author needs to decide whether to write linked stand-alones or to make an arc over the series.

There can be a slight switch within subgenres as long as the world is already firm. For instance, a character who has ESP might fit into a small town story that is not a paranormal.

There must always be a resolution at the end of each book. However, if there is an overall arc, that must continue.

With a series, an author can get lots of reader email. Readers sometimes insist upon a book for their favorite character, but an author should not feel forced to write it. Sometimes a novella or short story will satisfy readers—or a bonus chapter.

CREATING RESONANCE: THE SUBTLE ELEMENTS OF FICTION given by Winnie Griggs and Laura Marie Altom was a long workshop, but it didn’t feel long. These two authors covered a lot of ground.

They reminded everyone that an author’s use of descriptive language is much the same as an artist’s box of crayons.

There are many types of descriptive language. In using an analogy a writer is teaching or convincing the reader. Analogies are stronger than similes.

Comparative language is ZEUGMA (new word for me).

Symbolism is a kind of shorthand. There are two types of symbolism in literature: universally understood (road signs, shooting stars, falling leaves) and author-created symbols. These must be used subtly.

An author should avoid clichés and strive for fresh imagery. Setting and mood can add to that imagery. For instance, songbirds and sunshine portray a light-hearted image.

Imagery should be focused, but one image will do—avoid several at one time which would create an overload. Figurative language is powerful. An author can repeat the image but in a different way.

Foreshadowing involves either a broad stoke, providing a big picture, or a pinpoint and specific clue. Which one is used often depends on the genre. The best type of foreshadowing is a surprise.

The subtext of a story is inferred. It is what the character is really saying between the lines. When they try to hide something, the story gets interesting.

There are types of subtext:
When words are at odds with tone.
Body language.
The author’s word choice.
Snippets that have little weight alone, but can have a cumulative effect.

Subtext can deliver your agenda. It elevates an author’s work to art.

Sensory description involves the five senses. To make a richer scene, layer in the details and tailor those details to the story.

Backstory involves secrets. Hold back on those secrets. Wait until they can answer a story question. This builds reader involvement because they feel some satisfaction in guessing some of the revelations, but be subtle.

Hold back the big surprise until the last possible moment.

An author needs to train herself to choose the right word. Choose concrete words over vague.

Transitions must condense time in a book. They bridge the gap and aid in the seamless unfolding of the story. The trick is to know what details to enclose. Mundane life events are uninteresting.

Changes in time, changes in place, POV changes, and changes in scene focus need to be handled with transitions.

There are two kinds, either simple or complex. The simple one uses individual words that cue the reader. These are short and direct. For instance, later that day or once they arrived at the beach.

A complex transition can be conveyed by mood. Sensory passages can signal the POV. A memory trigger for the character can be a transition. The memory can be that of another character, an object, or the environment (weather or seasons).

Transitions can layer in emotions but leave out the trivial things that are not important to the plot.

Atmosphere should be matched to the story. Weather can heighten a conflict. Let Mother Nature ruin your characters’ lives.

Winnie and Laura gave a great presentation and handed out several of their books. In fact, I received so many free books at the conference that my To-Be-Read pile is now higher than ever!

If you write romance, plan on attending the New Jersey Romance Writers Conference next year.
Posted by Penelope Marzec at 10/25/2011 09:28:00 AM

It sounds like a great conf--especially the chocolate covered pretzels ;) I know every genre is different and I don't write romance, but some of the advice, especially around social media, makes me feel like we're all walking around in a great forest in the dark, going, I think that's a tree...what can we do with a tree?

I just mean to say that no one really knows what sells books--as the traditional publishers would be the first to admit. WOM--but what accounts for WOM taking off? Is it twitter or FB? I have a feeling not. Those things may help a book that has legs, or wide appeal--but that appeal was there first. FB et al are great media to get messages across--when the message is already there.

In my humble opinion from early days, of course.

I think that writing the greatest book you can, and then another and another, is the best form of marketing. People will be burning to read your books--and they'll use social media to tell people so.