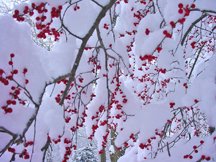 Here's our winterberry bush covered with snow. We had lots of fluffy soft snow early this morning. I had to drive in it. At 2 am I took hubby to the hospital. There is nobody on the road at 2 am.

Hubby became violently ill last night. He has never had more than a muscle sprain in all the years we've been married. From my Merck Manual of Medical Information, Second Home Edition, I was quite sure he had kidney stones. I bought the book to be sure that my fictional characters have the proper symtoms for their illnesses--but it is a useful book for real people, too. :^)

After the doctor in the emergency room had x-rays and a CAT scan taken, I learned I my diagnosis for hubby was correct. Still, it was rough on hubby. And I didn't get any sleep, so I am a walking zombie right now.

However, after pain medication and a referral to a urologist, hubby was freed from the ER. By that time, the sun had come out and the snow was melting.
Posted by Penelope Marzec at 12/06/2005 06:56:00 PM

I hope your hubby feels better soon!! That is an extremely beautiful pic by the way...

I've heard that Kidney Stones are very, very painful! I hope he gets better.

Kidney stones are VERY painful for men. My ex used to get them in the summer time when he drank soda all the time and not enough water. He worked outside.

The picture is beautiful. There are berry trees here, I don't know what they are called, but when it snowed it looked like a dollop of whipped cream perched on top like dessert ready made on the tree.