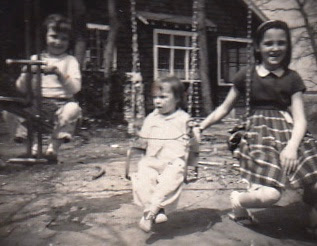 I was inspired by Garrison Keillor's column in the newspaper today. He spoke of "cheerful stoicism" and said, "If you moped around, Mother gave you two options: Go outdoors or do something useful. Or both: Go mow the lawn."

It struck a chord with me because as a child, I had plenty of chores. In the photo on the left, I am probably nine years old and minding my little sisters. That was my basic job for many years in addition to hanging the laundry out on the line and bringing it in. I swept and mopped floors, cleaned the toilet, scrubbed the tub. I was my mother's apprentice cook as well--so was my brother. As my little sisters grew up, they too became Mom's apprentice cooks.

We still had time to play, but chores came first. We never watched television in the summertime. The television inevitably needed repair every summer and my parents wouldn't have it fixed until September because during the summer there were nothing but reruns on the tube. It was fine with us. We didn't miss it.

None of us had to go off to karate or dance classes. My parents couldn't afford anything extra. My brother was a scout and so was I. Plus we went to CCD classes as required by our church. That was the extent of our extracurricular activities.

I didn't mind having chores. It was part of life. I was a valuable member of my family--and I knew it. I didn't get paid for doing chores either. There weren't any options. I did it because I was told to do it and it needed to be done. All that prepared me to be an adult. I was "adulting" at the age of nine.

That was also the time I started to write in my "free" time.

Labels: chores, Do Something Useful