My guest today is a writer of romance and young adult books. Mary Marelli brings the word of God and the love of animals through in her stories.  Her debut novel, MOON OVER MONTANA is packed with mystery, romance, and a young couple’s fight to save a herd of wild mustangs from rustlers.  Mary’s book is published by White Rose Publishing.  She is currently working on a young adult series, entitled Misty Rose, a story about a grief stricken young girl who forms a special bond with a traumatized horse.
Mary believes a special bond exists between people and animals.  They possess a wonderful, magical way of reaching out to us when we need it most.  We talk to them and they never spill a secret.  We find solace in their presence and comfort in their loving demeanor.  In MOON OVER MONTANA, as well as Misty Rose, the heroines find a special bond with a horse.  Caring for them helps their grief to ebb and gives renewed purpose after suffering a sorrowful loss.  Animals can help us heal and Mary hopes to bring a sliver of their special world to her readers.
Mary lives with her husband and hound, Stacey, on a private lake nestled in the foothills of the Pocono Mountains.  Mother of two and grandmother to a teenage boy, her writing is inspired by a variety of true life experiences and a cause dear to her heart, the preservation of America’s wild horses.
Long walks around the lake with Stacey lead to quiet times and talks with God.  Mary believes that prayer doesn’t always have to be formal.  It can come at any time and in any place.  Sitting on the shore of the lake with her dog, brings comfort.  Long talks with God bring peace.  Mary’s strength comes from the Lord and she hopes to share bring that out in her work.
Moon over Montana is scheduled for release on both Amazon Kindle and Barnes and Noble Nook on June 17.  You can pre-order it now at Amazon. 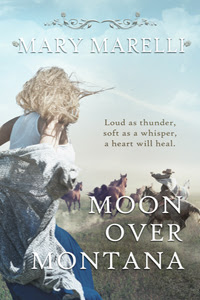 Read what MOON OVER MONTANA is all about:

What do you do with an inheritance that no one wants?

Megan Donovan's broken engagement has left her aimless with only one place to go: Montana. Her estranged grandfather has left the broken-down ranch of her mother's youth. Trouble is, Mom's memories of that time are so tainted that Megan doesn't want anything to do with the place.

The wild horses that David “Cam” Campbell protects from rustlers need a sanctuary to roam free. What better location than Old Man Jenkins' acreage adjacent to his own successful ranch? But Cam's gotten off on the wrong foot with Megan, and that gal's not selling—not unless Cam can convince her that it's best for everyone involved.

But is giving Megan a reason to leave, really the best he can do?

They reached a slope, and Cam motioned for her to stop. Megan reined in Sparkles and stood silently by Ricochet’s side. Cam pointed. Golden rays peaked the mountaintops driving away the shadow of night. Megan’s eyes grew wide, and she lifted her camera close to her face.

“A sunrise ride,” she muttered. “How beautiful.”

Cam leaned close and whispered in her ear. “It is, but that’s not the reason. Wait for it.”

Bright sunlight spread across the terrain, bathing the valley below in soft golden tones. Dew sparkled off the ends of tall grass. A golden eagle screeched and soared high into the morning sky. The sound of drumming broke out, and Megan captured a shot of a ruffed grouse beating its wings. A northern flicker pecked grubs from a nearby tree, and twittering black-capped chickadees flitted about. They dove to and fro pecking seeds and insects from the ground.

A soft whinny echoed across the valley. Megan gasped. Tears sprang to her eyes, and she turned her camera toward the sound. The thunder of hooves built slowly and then intensified as a herd of wild mustangs galloped through. A chestnut stallion stood watch over his domain, a sorrel mare by his side. The mighty leader whinnied and tossed his head. Majestic, devoted, and brave, he guarded his herd of mares and foals.

Cam pointed. “This is what it’s all about. This is my passion. My crusade, if you wish. This is what I’m fighting to preserve.”

Megan’s bottom lip trembled, and she lowered her camera. “They’re beautiful.” She shook her head. “No. That doesn’t do them justice. They’re magnificent. So regal and loyal.” She turned toward Cam. “They are, you know. Loyal. They’re a family.”

Cam nodded. “That they are, and I wish more people saw it that way. Look at them. They’re not causing any harm. Cattle don’t graze down in that hollow. It’s too dangerous to drive them down. As long as the horses stay here, they’re safe. It’s when they stray onto the range we rode though, that they’re in danger.”

“What about my grandfather’s land?”

“There’s a lot. More than I imagined,” Megan explained. “Will they be safe there? When you think about it, it’s my land now. Anyone who comes there after the horses will be trespassing.”

“That’s the way of things now, but it wasn’t always that way.”

Megan lowered her head. “I forgot. I guess they were open targets there.”

Cam scrutinized her closely. “What’s on your mind?”

Megan shook her head and picked up her camera. “Nothing. Just a thought.”

Megan continued to snap shot after shot of the horses as they grazed. The stallion stood at the head of his herd. A foal suckled its morning nourishment. More foals pranced around the tall grass and splashed in the stream running through.

“For what?” Megan asked.

“I will. But will you please tell me why?”

“Because I’m going down to drive the herd deeper into the valley.”

“It can be. That’s why I want you to wait here. I’ve done this before.” Cam nudged Ricochet forward. “I won’t be long.”

Cam pulled a bandana over his mouth and nose, and Megan held the camera close to her face. Cam guided Ricochet down the steep incline. His shrill whistle pierced the air, and he nudged Ricochet into a gallop. The stallion whinnied. Sounding the alarm, he led his family of mares and foals to safety. Dust rose from pounding hooves. Cam reined Ricochet to a stop as the last mare disappeared from sight. He sagged in the saddle, his head hanging low. Megan zoomed in catching the final shot. With a snap of reins, Cam guided Ricochet back up the steep incline.

“They’re safe for now,” Cam declared as he drew close to Megan.

“They are. Once we run them off, they don’t return for a while.”

“I’m not the only one,” Cam answered. “Along with Brandon and Bean, Colt and Avery also come out and monitor the herd.”

A lone tear broke loose and slid down Megan’s face. “Yet some of them still vanish.”

Cam reined in Ricochet toward the direction of home. “It’s an ongoing battle.” He elbowed Megan lightly. “What do you say we get these two home and raid the diner for breakfast? We’ll sure get people talking.”

A bright smile broke out. “You’re on.” Megan laughed. “As my mother always said, sometimes it’s fun to stir the pot.”

“Then let’s get stirring.” Cam nudged Ricochet and broke out in a gallop.

Megan stashed her camera in the saddlebag and, wind blowing through her hair, raced to catch up.

What an interesting subject for your book. I agree animals are loyal and faithful friends. When we have a pet, it becomes a part of our family. I enjoyed your excerpt and with you the best with your book.

Mary, congratulations on your new release. I have enjoyed reading the book. It's a wonderful story. I am not around horses, but I have a dog, and she is a source of comfort and encouragement...unconditional love. Blessings to you.

Congratulations on your upcoming release, Mary. I enjoyed your story very much.

Thank all of you for the wonderful comments. This is a very exciting time for me, and I'm thrilled to share it with you. And thank you Penelope, for showcasing me on your blog.

You are welcome! When you have another release, let me know so I can post the news here.