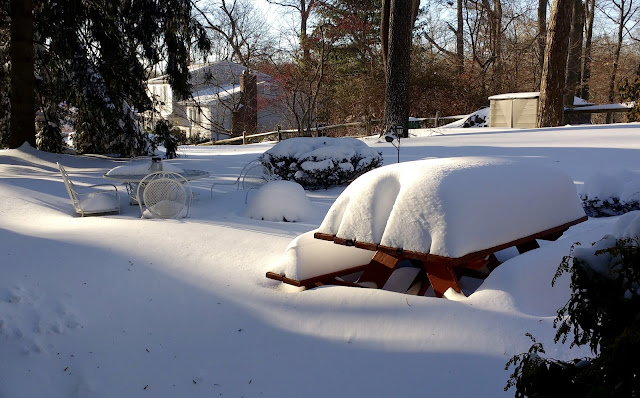 This is our patio on the morning after the blizzard of 2016. We won't be having a cookout anytime soon. It's going to take some time for all the snow to melt. Unless we get more on top of what we've already received, which could happen. After all, it is January.

We were fortunate that we did not lose power during the storm, and we are on high ground so we don't have to worry about flooding. We were worried about our roof because a recent storm caused a few shingles to lift and we had water dripping into our living room. However, the roofer's fix seems to have held and we were delighted about that.

I spent the blizzard finishing a baby blanket I started, prompted by my crocheting friend. I also converted an old VHS tape to a DVD. I spent too much time on the internet looking at everyone else's snow pictures as well as the flooding along the coastal areas of NJ.

I shoveled snow. It was wicked outside, but we figured we better make at least one pass to get rid of what had already fallen before the rest of it came down during the night. Fortunately, we have a wonderful neighbor with a huge snowblower who helped us clear away a great deal of the white stuff. Otherwise, we'd still be out there.

I made my favorite pancakes for supper. Daughter #1 decided we deserved wine to go with them after all the shoveling. I didn't get much writing done. Listening to the wind made me too tense!

Were you in the path of the blizzard? How did you spend those hours while the storm raged outside?

Labels: The Blizzard of January 2016