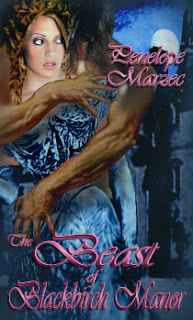 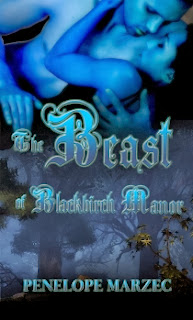 The Beast of Blackbirch Manor has two covers, the one on the left is the original version designed for the digital edition and is still in use at Barnes & Noble's online site. The cover on the right is the one you will see at Amazon for both the print and digital editions.

The story is my take on a classic Gothic as well as a retelling of Beauty and the Beast. The heroine, Victoria, was married by proxy to a cursed man, covered in fur and destined to become a wolf.

The scene below is a dream sequence in which Victoria relives a horrifying moment in her life...

She heard the wail. It sounded more like the cry of a beast than a human. Searching though the long corridor in the basement beneath the manor, she shivered with only her thin nightgown to protect her from the chill. She loathed the basement where the dampness set mold to growing on the walls no matter how often the servants scrubbed it away and she feared the creatures that inhabited the darker corners. But she could not think about that now. Her bare feet made no sound as she hurried softly along the passage.

She cursed Paul’s stubbornness for refusing to have her mother put away. If he would only listen to reason! She wanted to be free--like other young women her age. She was seventeen! She wanted to go to parties and dances. She wanted to fall in love. But there could be no peace in Blackbirch Manor due to her mother. It was as if the old house had become a prison for them all.

Another animalistic howl sent ice tingling along her spine. An echo bounced off the solid stone walls. Stopping for a moment, she listened intently but heard nothing save the creaks and groans of the massive timbers as they bore up under the weight of the old dwelling. Her hands shook as she felt her way along the walls. She paused at the door to each storage room and barely breathed, waiting to hear the rasp of her mother’s labored gasps for air.

The darkness was complete. She could see nothing, but when she heard the singular creak of the heavy door that led from the basement to the kitchen stairs, she scrambled in that direction. The sound of her mother’s laugh, a wild cackle that seemed almost demonic, froze her heart. The hinge of the door that led outside squealed and she felt the draught of the wind rushing into the basement. Her heart quailed, for there could be no telling in which direction her mother would go once she escaped. If she ran all the way down the hill into Taylor’s Grove, everyone would learn the truth. That must not happen--no matter how much she resented caring for her mother. She did not want anyone to know of her mother’s madness.

Stumbling up the steps and out into the chilly night, she saw she had only a pale sliver of moon to guide her. She ran into the kitchen garden, but her mother was not there. From the corner of her eye, she caught a movement at the corner of the house. Taking a deep breath, she sprang in that direction for all she was worth.

More hysterical laughter echoed in the icy air as she rounded the corner in chase. An ache in her side slowed her, but she did not stop. Her mother must be headed for the gate! In despair, she wondered why no one else had come to help her. She tried to call for Paul and Ipsy and William--anyone--but though she formed the words with her lips, no sound came out.

Off to her right, she heard the crush of leaves in the underbrush and the snap of branches in the woods. Someone--or something--was nearby. Fearfully, she looked this way and that, but all she saw were the swinging their branches of the black birches in the nighttime breeze--shadowing the pallid moon to leave her in darkness so deep that the gloom became as dense as a thick velvet curtain.
Again, she heard the sound and the smell of terror filled her nostrils.

Without any other warning, she was grabbed from behind. And then she heard the scream, the hideous screams that echoed on and on.

She woke and realized that the screams had come from her own lips. Her heart thundered as she stared up into the face of the Beast. He loomed over her, his powerful hands pressed against her shoulders, pinning her upon the mattress.