For Halloween, THE COMPANY YOU KEEP on Sale for $0.99 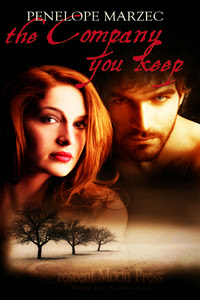 I've reduced the price of THE COMPANY YOU KEEP to $0.99 for the month of October. This book has a ghost, a billionaire, plenty of evil entities, and a terrible secret.

😱
Here are snippets of reviews from the past:

A reader on Goodreads said, "This book surprised me. I though it was just a romantic novel, but I was wrong. Besides romance, includes other genres like suspense , paranormal and crime. I couldn't put it down until I finished it. I really enjoyed the story!"

Diane Tugman of The Romance Studio said, "With each chapter you'll be drawn into a tangled web of the supernatural."

Anastasia Castella-Young of Mind Fog Reviews said, "I highly recommend this paranormal romance to those interested in demons, spirits, adventure and love. Penelope Marzec hits the mark dead on!"

This is the story of Jennifer Brant. Her existence has centered on protecting the world from a cursed spirit who guards a deadly portal located on her farm. When a billionaire developer, haunted by the sins of his past, wants to buy her farm, she refuses, knowing the spirit will be released on those she loves. When someone intent on controlling the demon kidnaps her brother in order to use the farm for his own evil deeds, Jennifer and the billionaire must unite to save her brother and destroy the portal. Can their union grow into a loving and safe lifetime for them and their future generations?

The following scene is in Nathan's point of view--he's the billionaire. While Jennifer sleeps after being involved in an accident, Michael, her brother, offers Nathan the land he wants. This comes as quite a surprise to the billionaire...

Nathan placed another log on the cheery blaze in the fireplace. Jennifer lay on the couch, bundled in a wealth of quilts. Her chest rose and fell softly in a steady rhythm. He sat in the chair and took a calming breath. Despite a variety of bruises and a mild concussion, she should be fine, especially since he had volunteered to watch her for the rest of the night.

Michael walked into the room with two brandy glasses. “Here, McDugan. It’s been a long night.”

“Thanks.” He accepted the glass.

Michael paced around the room with his brow deeply furrowed. The younger man was still revved up and running on adrenaline.

“I want to thank you. I really panicked when I saw Jen’s truck up against that tree,” he admitted. “I’m usually cool on a call but it’s different when it’s one of your own...” After a pause, Michael continued in a raspy tone. “You see, our parents died in a car accident.”

He nodded. He’d felt the twist in his gut when he had heard the metal crumple in the crash, but when he saw Jennifer in that wreck it was as if his heart slipped out of gear. He sipped some of the brandy. The warmth of peaches tingled on his tongue and his control nearly crumbled. Wiping the sweat from his brow, he dared another taste. The sample reminded him so vividly of the flavor of Jennifer’s lips that he felt nearly possessed.

He drew in a great breath. For a moment tonight, he thought he had lost her. In that brief flash, raw grief sliced into him. Thinking about it later, he was stunned at his violent reaction. He told himself that simply visiting a wreck stirred up the old horror.

“The police said someone tampered with the brake hoses,” Michael blurted out. “But that’s ridiculous. I know it’s an old truck. But George—” He stopped his restless pacing and paled. “George always fixed it.”

“She said the brakes didn’t work.” He kept his voice low. He did not want to disturb her. She needed to rest.

“Yeah. Yeah. I know.” Michael downed a good portion of the brandy in one gulp. “How much land do you really need?”

He narrowed his eyes, wondering if he had heard correctly.

Momentarily speechless with surprise, he nearly dropped the glass in his hand. Did he see desperation in the hard lines around Michael’s mouth? “Your sister has led the fight and worked the hardest to keep me out of Marlpit. Won’t she consider you a traitor?”

“Everything has changed in the last few months. Everything.” Michael swore softly. “My wife is ill. We had another dry summer so we didn’t grow much produce.” He gave a small snort. “Except for peaches. We had plenty of peaches. Now with Jennifer’s truck destroyed, I don’t think there’s any way—” He didn’t finish the thought. A deep scowl creased his forehead and he balled up his fists.

Nathan cleared his throat. Warning gongs sounded in his brain but he ignored them. He had no reason to trust Michael Brant. However, after tonight, it seemed worth the gamble. “Forty acres.”

Michael sniffed. “Why didn’t you tell us that in the first place?”

“I padded my original proposal figuring it would get whittled down to nothing anyway.” Despite the heady liquor, his nerves seemed ready to snap. He’d wanted this for so long.

Michael set his glass on the mantle and stared into the fire, his back to Nathan. “What price?”

He realized he was about ready to crush the glass in his hand. He forced himself to relax. Leaning back in the chair, he tried to look casual. He didn’t want to get roped into a ridiculous deal.

“This is an unusual liqueur,” he said, taking another sip from his glass. “Do you make your own brew?”

Michael’s shoulders sagged. “Nah. That stuff is something Jen mixes up. Peach juice and vodka, I think.”

He glanced at her, still sound asleep on the couch. Wispy tendrils framed her serene face. She looked fragile—and enchanting. A pang of something like loneliness stabbed at his heart. Clearing his throat, he added. “Your sister is quite talented.”

“Yeah. Well, you have to do something with all those peaches before they rot,” Michael commented. He plopped down in the wingback chair and hung his head. He looked beaten.

Despite the smell of victory, a hollow space seemed to widen in Nathan’s heart. This had all become more than a simple business deal. While he had spent months arguing with Jennifer and the people of Marlpit, he would win only because fate and some crazed maniac had lent him a hand.

“Which forty acres are you willing to part with?” He stared into the sweet but potent liquor in his glass.

Silence hung in the air for several tense minutes before Michael answered. “You can have a portion of Abigail’s woods.”

He lifted his head and frowned. “It would take extra labor to clear it.”

Michael stood again as he spoke louder than before. “It’s well up on the ridge so you won’t have any drainage problems. In addition, it’s out of the DEP’s designated area.”

Then something sparked in Michael’s eyes as his voice reached a new crescendo. “Aside from that, the visitors to your fancy theater will have a sweeping view of feudal serfs living as they did in the dark ages! You should be able to raise the price of the tickets for that privilege!”

Jennifer moaned and stirred on the couch. Without conscious thought, Nathan sprang to her side. He touched her forehead. His hand shook. He wasn’t sure if she felt warm or hot. Dammit. She looked too pale.

“Should I wake her like the doctor said and ask her some questions? Do you think she’s all right? How does her forehead feel to you?” His heart hammered in his chest.

Michael rubbed the back of his callused hand on his sister’s cheek. “She’s okay. I should just keep my big mouth shut.”

Relief flowed through him. “She always tries to act so tough but she isn’t,” he mumbled, almost to himself. Then he glanced back at Michael, catching an odd puzzled look as it flitted across the younger man’s features.

💀💀💀
You can find the book at many ebook distributors.
Amazon
Kobo
Barnes&Noble