Summer in the Past 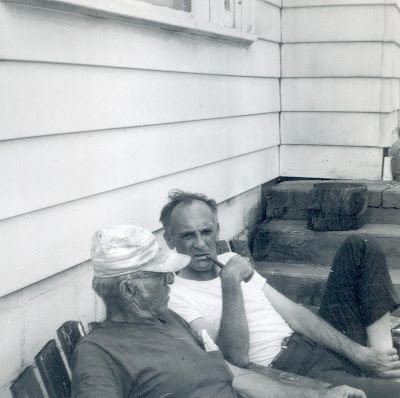 As summer draws to a close, I have been thinking about summers in the past. When I was young, my family drove (in our non-air conditioned car) out to southwestern Pennsylvania to visit my mother's family. That was our vacation. Every year. We never went to Aruba, Paris, or even Miami. Nope. We visited my grandparents, my aunts, uncles, and cousins. Since my mother had five brothers and one sister, we had a lot of relatives to visit. For the most part, we stayed in my grandparents' home because the majority of the relatives lived nearby--except for my aunt in Ohio. We had to drive even further to visit her.

My siblings and I slept in the attic at my grandparents' house. It was stuffy and hot. No air conditioning there either. It did not exist.

We had fun as I recall. We jumped into the hay in the barn. We picked wildflowers and berries. (Even if we handed Grandma a dandelion, she put it in a vase.) My mother made pies and jam from the berries.

The photo above was taken in 1966. It shows my mother's father and my father discussing world events--a coal miner and a journalist. My grandpa came to this country when he was sixteen and became a coal miner. He always spoke English with a heavy accent. While he had little formal schooling, he was smart, talented, and artistic. He maintained a small farm and built three houses on his property over the years.

The pace of life slowed as we listened to everyone talk. In the evenings, we all moved to the front of the house because it was shady there. The house sat on a hill. A two-lane highway stretched below it and we simply listened to the conversation and watched the cars go by. No television, no radio. Sometimes heat lightning on the other hills gave us a little show.

Nobody complained or said they were bored.

What a beautiful post that makes me yearn for that gentle simplicity of long ago.

It sounds like your summers were filled with family, beauty and wonder.

Glad you enjoyed the post. I am sure that listening to all those stories in the long summer evenings helped me to be a writer. :^)

Me too! Drive to my Grandparents farm. Eat berries. Jump from the hayloft into the hay (or a wagonful of wheat) Sleep upstairs and see the spooky treestump on the far side of the cornfield. Those were the best days ever!
Snapping beans under the tree because there was no AC. (All the chairs were there) . The treehouse my grandfather made us. I could go on forever. Apples.

Glad you spent time on the farm, too.

However, as far as apples go, I bit into one right off the tree and found a worm. Yuck. I didn't eat apples for the longest time after that.