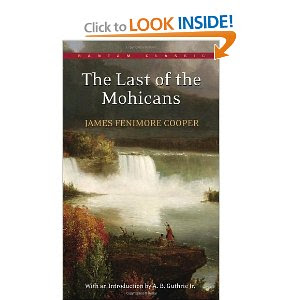 I have enjoyed many classics over the years and I continue to read them. After our trip to Great Camp Sagamore, I realized I had never read The Last of the Mohicans. I've read many of James Fenimore Cooper's books, but not that one. I immediately downloaded a free copy into my iBooks. Yes, his style is--at times--slow. However, I've found with every one of his books it takes a while to settle in, but once there, you've got a good story.

The first line of the book is:

"It was a feature peculiar to the colonial wars of North America, that the toils and dangers of the wilderness were to be encountered before the adverse hosts could meet."

A little slow, perhaps. In today's world, writers are told to make sure their first line is intriguing enough to draw the reader into the story. In reading the reviews listed at Goodreads, I found a lot of readers who hated the book. There where many who never finished it and some who didn't think it had been written in English. :^(

I believe there are a lot of impatient people in today's world. They've been raised on too many crazy action films. Opening a book is not like walking into a theater. Slow beginnings are found in many of the classics.

Here's the beginning of Wuthering Heights:

"I have just returned from a visit to my landlord--the solitary neighbor that I shall be troubled with."

Go to Goodreads and read some of the negative reviews on that one. There are readers who thought it was horribly dark. Well, yes it is. That's the point.

Admittedly, there are many good reviews, too. There are still some patient readers in this world and I applaud them.

I enjoy light and breezy novels, too, at times. But I find it enriching to immerse myself in the past as well. Sometimes I may even have to use the dictionary and look up a word--and I love that! It's great to find some wonderful antique word that nobody uses anymore.

Here's the first line from The House of the Seven Gables:

"Half-way down a by-street of one of our New England towns stands a rusty wooden house, with seven acutely peaked gables, facing towards various points of the compass, and a huge clustered chimney in the midst."

Obviously, the reader can guess he or she will be reading about the house and its inhabitants. Again, if you look up negative reviews on Goodreads you will find plenty of dissatisfied readers, those who did not finish it or those who claim it took them an inordinate amount of time to finish it.

I find it terribly sad that some of our great classics are being disparaged by those who simply want something they can read in a few hours using very little cerebral action. Be patient, dear readers. Those old classics are time machines. Sink into the past.

Excellent point. Just because a first line isn't all that compelling doesn't mean the rest of the book won't be. Whoever said first lines needed to pop, zip, and wow you needs to stop telling people that.

I always try to make my first lines pull you into the story in a natural way and not the "I'll club you over the head to make you read this story" kind.

Exactly! First lines should be more natural. Some classic books have memorable first lines, but not all of them. However, the plots are still terrific.

I think writers should worry about the middle of their books more than the first line.