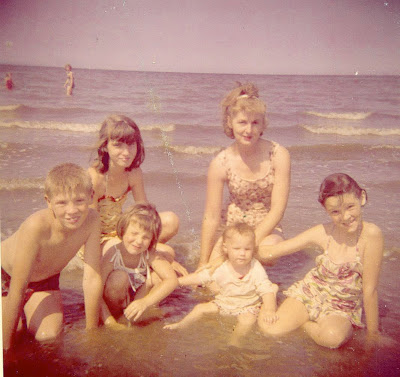 One summer, my cousin Sandy came to stay with us. She's the girl on the left in the back, next to my brother. Sandy lived near Pittsburgh in a comfortable suburban home. My uncle and aunt had adopted her, but then they had four children of their own. Sandy felt she had far too many chores to do.

She enjoyed her stay with us and we all got along quite well but after she returned home, the tensions between her and her parents grew worse until at the age of sixteen she ran away from home. She called a taxi, telling her younger sister not to tell anyone.

Sandy was never heard from again. She was never found.

My mother and I had hoped she might run to us, since she had gotten along well with us. When we learned of her disappearance, we went to Penn Station in Newark and stood for hours on the platform hoping to spot her. It was a futile effort.

For a long time afterward, whenever a young woman's body was found in New Jersey, my mother would wonder if it was Sandy.

When I wrote Heaven's Blue I dedicated it to Sandy. It is not Sandy's story, but I was inspired to write it due to her disappearance because I always wished her story had a happy ending.

Oh, Penny, how sad. Has anyone tried searching for her recently? With the internet people have been more successful in the last few years.

I am so sorry to hear of her sad tale. I hope she is alive and well somewhere and that you are able to find her.

This happened so long ago--long before the internet. Sandy's parents died as did some of her siblings. The trail is very cold by now.

I have always hoped Sandy would be safe and that someday she would get in touch with someone, but she never did. So we assumed the worst.

That's so sad Penny. I know what it is to have never met a sibling but I can't imagine knowing someone and then losing them without a trace.

It was inconceivable to me at the time that someone could simply vanish. But it happens and it's frightening. :^(