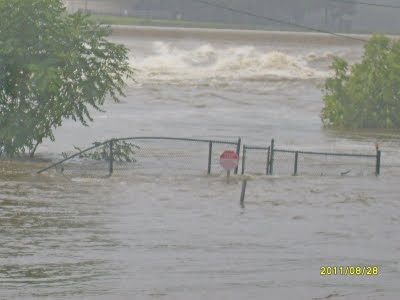 Hurricane Irene is gone, but she left a lot of misery in her wake. For the first time in the thirty-two years we've live here, the reservoir near our house overflowed at the same time the tide rose. This created a huge flood.

There have been several storms where the level of the river was high. I have a blog post with photos from several years ago here. However, Hurricane Irene dumped more water on us than any other storm. 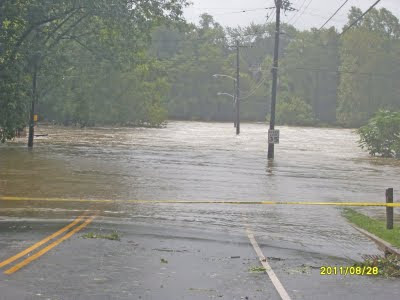 There is a bridge somewhere underneath all that water. Fortunately, the dam did not break--though we were worried that it would. Other dams in our state did not hold.

Our house was safe up on the hill. Our neighbor's house, to the left of the road in the photo, was flooded and knocked off its foundation by a chunk of the bridge that broke away. That house has now been condemned. Another neighbor had a tree fall on their house. Many of our neighbors have lived for a week without electricity.

Other communities in our state had far more devastation from this one storm and my heart goes out to all of those who have lost so much.
Posted by Penelope Marzec at 9/01/2011 09:19:00 PM

The hurricane lasts a long time after the winds stop. Hurricane Ivan lasted in Cayman for years. You can still see Ivan damage today.