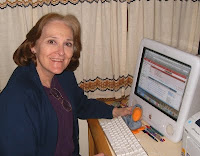 And thank God for all of you, for what would we do without those wonderful stories to read and help spur our own imagination?