The Blizzard of December 2010 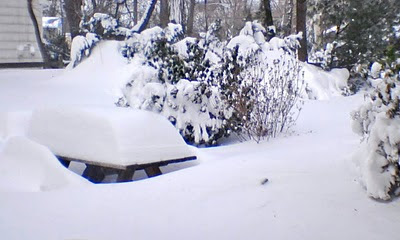 Yes, that is our backyard in the aftermath of the Blizzard of December 2010. Our picnic table is buried in a rather deep drift.

When we walked out of church last Sunday, it was snowing. Everybody in town went immediately to the grocery store, which they do every time the flakes fly. However, this time it turned out to be a good idea. The subsequent blizzard left us stuck at home until Tuesday morning when the plow finally came through. Of course, we spent most of Monday clearing the snow off our cars and digging out the driveway.

Later in the evening we played several rounds of Bananagrams--a great game for word lovers!

Many of the roads are still dangerous. It was a bad storm, but I do believe it should have been treated more aggressively. Nevertheless, it is supposed to be warmer today. Hopefully, a lot of this white stuff will melt.

It's good to hear you made it safely through the Blizzard. I love snow but not that much at once :-) I hope they figure out the delay in response.