Some Sort of Miracle 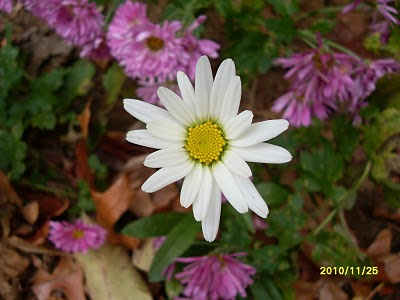 I woke up yesterday to find a single daisy flowering in our yard. I decided it had to be a sign of from my mother. Daisies were her favorite flower and are not usually seen blooming at the end of November in New Jersey.

I cooked Thanksgiving dinner--again. The first time I cooked Thanksgiving dinner, I was 19 and my mother was in the hospital with soaring high blood pressure. Up until that point, I had always been my mother’s apprentice. Mom was an exacting cook. Everything had to be done her way. The celery was chopped just so. Mom made stuffing from scratch. The pie crust had to be handled gently so it would be flaky and light. My siblings and I were relegated to certain specific tasks for the annual Thanksgiving feast, but that year, I did it all. Maybe it wasn’t the greatest meal but I enjoyed the sense of accomplishment I found in my own ability to rise to the occasion.

As Mom aged, I took over the role of hosting Thanksgiving every year for the burgeoning clan. Mom always brought yams and pumpkin pies to the feast. With her gone, I made the pumpkin pies and one of my sisters made the yams. My other sister made apples pies and cranberry relish. My daughters are my assistants—though I am by no means as exacting as my mother was. Some things are not worth all the fuss because the fact is that Thanksgiving isn’t about the food. It’s about reconnecting and catching up--long conversations with the people I love. It’s about laughter and the treasured memories that we share—and passing those memories along to the next generation.

Mom isn’t with us anymore—except in spirit, and hers was an indomitable one. As I was whipping the potatoes a wave of sadness washed over me because Mom wasn’t there, but then I thought of the daisy outside. It is difficult to be down when you’ve got your own little miracle occurring right outside the back door.

She's still looking out for everyone! :) Thank you, Grandma, for not making the sweet potatoes explode in the oven, and sending a flower instead!!! ;) s

Nice reflection on the day. My husband makes our large clan's Thanksgiving dinners these days. He's the cook, I'm the bottle washer. We gather our adult kids and all the grandkids who are in the area for a traditional turkey meal on the Sunday before Thanksgiving. Then he goes to his siblings in Chicago on the day itself.

This year, as the kids and grandkids chattered and played around us as we did the brunt of the work, I thought back to my own mother and Thanksgivings of the past. Just as my kids do now, my siblings and I had our tasks to do while Mother did the brunt of the work. I looked at my husband and smiled, thinking into the future, when our children would be "in charge" and we would either be sitting back like our mom in her last years, or our place at the table would be gone as with my father earlier on.

Thanksgiving is a wonderful holiday, probably the best family holiday there is.

Thank you for the reminder. A great Thanksgiving blog and a reminder of all we have to be thankful for.

Beautiful post, Penelope, and a powerful and poignant reminder to those of us with living parents to appreciate their presence in our lives. God bless you!

Awww, what a sweet story. I'm glad you had that daisy for Thanksgiving and could pass it along to your dad.