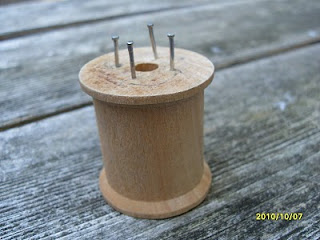 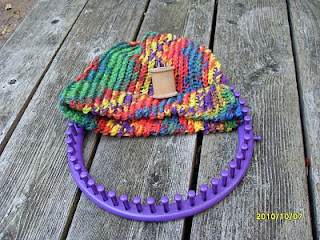 It never ceases to amaze me how some old ideas can be transformed into something new and improved. Of course, I want to make a hat, too.
Posted by Penelope Marzec at 10/08/2010 01:20:00 PM

Way cool. I love the hat.
I used wooden spools like that.
My granddaughter has a version that is more like the spool than the hat making device. Here's is plastic shaped like a mushroom and called a knitting mushroom.

Thanks for your workshop at the MUSE conference. I am so enjoying it.

We did the same as children. My sister and I had chains 20-30 feet long that we never figured out what to do with. I use spool knitting for draw stings now. I read a quote somewhere that things of quality have no fear of time.

This brought back memories. I had a few ready-made spools and would make yards and yards of wool tubes, never knowing what to do with them. Even at 8 years old I found it very relaxing and fun to do.

I used to make horse reins with different colors of yarn. I thought I'd make it long enough to coil around and make an area rug. I guess not!

Sunny:
I think making a rug out of the horse reins could work, though you'd have to have a very strong thread to hold the coil together. The rug would be pretty with lots of colors, too. :^)