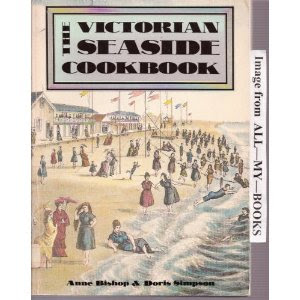 I went to another flea market today—a small one at a local park. I bought two cookbooks there despite the fact that I already have a large and varied assortment of cookbooks. However, I couldn’t resist. The first cookbook was the kind put together by a group of people to benefit their organization. Those types of cookbooks I’ve found to have some of the best recipes, ones that are simple but good. I’ve already decided to try one of the recipes this week—Smothered Chicken.

The other cookbook I can justify as a necessary reference book. Daughter #1 spotted it. It is The Victorian Seaside Cookbook, by Anne Bishop and Doris Simpson. It contains authentic recipes of the Victorian era served at hotels along the Jersey shore. It has lots of pictures and even a map of the railroad lines. History is a great deal of fun.

This amazing book contains menus, too. It is truly astounding to read of the quantity and variety of food served at each meal during the Victorian era.

Here I am, in 2010, counting every calorie I put into my mouth. By contrast, the Victorians seem like gluttons. Their breakfasts started with fruit, clam broth, and then a hot cereal. Next came three or four kinds of fish, grilled steaks, lamb chops, liver, and eggs. Following that, they heaped creamed codfish or beef, ham and bacon, several varieties of potatoes, hominy, and fried mush on their plates. In addition, there were griddle cakes with syrup plus hot chocolate, coffee, tea, milk or malted milk.

Reading all that made me groan. When I read about the Victorian dinner, which was far more sumptuous, my tummy started to ache.

Since we are what we eat, I do wonder about those Victorians. They spent a lot of time eating way back when along the Jersey shore.
Posted by Penelope Marzec at 8/28/2010 02:35:00 PM

Those Victorians could eat like that because they walked everywhere and, with their waists cinched in, the women only tasted some of their food....
The Irish can eat well, too, because they don't have cars and walk and bike everywhere. I learned this from an Irish friend who ate french fries wrapped in white bread as a snack.
I do envy you the cookbook, though. I'd like one myself!

I have a cookbook that I bought at the Salvation Army, from the 1940s (I think, the first couple of pages are missing). There's recipies on how to cook possum, wild fowl (ducks), and how to get the turtle out of the shell.... Something I don't plan on trying.

There's also a wine list from the 1930's or so, and suggestions on how the silverware lays in a formal setting. This must have been when folks really threw dinner parties. Martha would be envious. ;)

Your post made me smile ... I collect cook books from flea markets too. Have I ever cooked from one ... No!
Wicked Victorian with their small waists ... where did I go wrong

There's no way I would try to get the turtle out of the shell, but I might have a character do it. :^)

I think Irene is probably right about the women not eating much because they had to wear corsets.

Corsets will do that, yes. And the walking. I have cook book envy. Lucky you and your daughter's eye! I am a reenactor. These kinds of everyday things are so full of information about lifestyles and economy in addition to the obvious.

Perhaps part of the food and quantity is that it was a great time of family as well. Everyone came and ate together, celebrated together. Food always unites.