It's All in the Details 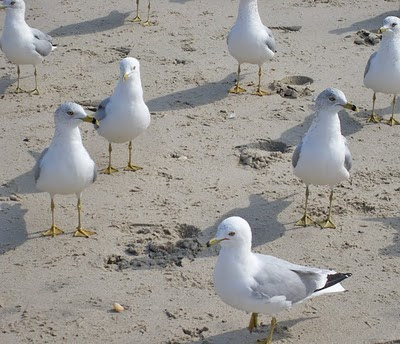 Hubby and I went to the beach on Sunday. It was mild for February even though the sand had plenty of snow on it as did the boardwalk. We watched one woman hand breadcrumbs to her children so they could feed the seagulls. The birds squabbled with each other over every piece. Of course, people really should not feed them, but it was interesting to watch the birds--up close. They weren't afraid of us. I think they figured we might be giving them a handout, too. They watched us rather expectantly.

Even if I didn't have a camera in my hand, I'm sure I could recall many of the details if I needed to use a similar scene in one of my books. Since I grew up at the shore, it's easy for me to create an accurate picture. I know the vocabulary of the beach, the color of the sand, the things that drift in on the tide, the smell of the ocean, the sound of the waves, and the cry of the gulls. Then there's that peaceful feeling that settles on everyone when they stare out at the vast expanse of water.

The beach has a special ambiance all its own, but no two days are alike at the beach. There's the beach in the fog (which is really awesome), on a windy day, and on a sweltering day in July. Same scene--different atmosphere, which is great for mirroring the mood in the story. It's all in the details.
Posted by Penelope Marzec at 3/04/2010 08:09:00 PM

This was so nice, it made me feel like I was there. I love the shore in the Winter.