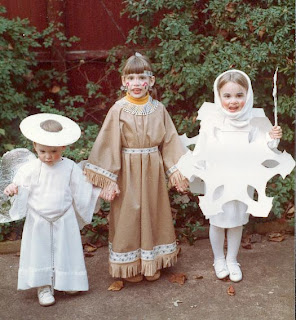 Few parents make costumes for their children anymore. Most of the costumes are purchased from the store. There are Power Rangers, Disney characters, and superheroes.

I used to create Halloween costumes for my daughters. It was fun--though challenging. Sometimes, they had rather unusual requests. Daughter #2 wanted to be a snowflake one year so I did my best to come up with a costume for her. 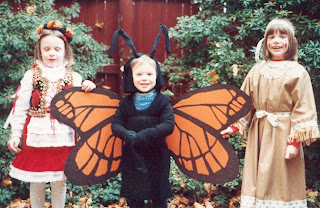 The following year, Daughter #3 wanted to be a butterfly. Fortunately, Daughter #1 was okay with being a Native American again--and Daughter #2 wore the Polish outfit that Babci had given her. I was able to throw all my energy into the butterfly.

But I'm getting lazy now. This year I decided to be a farmer. I wore my jeans, put on one of hubby's plaid shirts, tied a bandanna around my neck and stuck a straw hat on my head. Simple--and boring.

You did a great job. I used to do the same with my kids. Wasn't until they were much older that we actually purchased costumes.