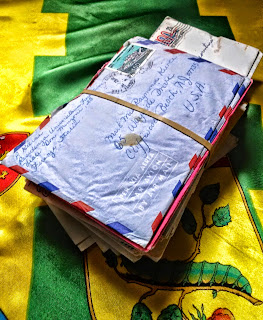 Many years ago before she died, my mother found another letter tucked away somewhere and gave it to me. I had written it to Mom and my sister when they were visiting my grandmother in western Pennyslvania. I had written it only a few weeks before my hubby and I were married. Using a fountain pen and my best handwriting, I rambled on about the bargains I had found such as my white, wedding shoes for $9.

Reading the letter, I realize now how young and naive I was. I have changed--a bit. :^)

Nobody writes letters anymore.
I remember my Grandparents handwriting. My Grandfather was born in 1895, and in his mind, paper was expensive and rare, and he didn't waste an inch. One Grandmother had beautiful handwriting, while the other had such shakey hands that you could barely read what she wrote.
I remember getting love letters when I was at sea in the Navy....
No email could replace what is gone.

It is sad that nobody writes letters. They are true treasures.