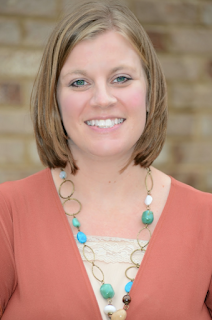 My guest today is Katie Clark. She started reading fantastical stories in grade school and her love for books never died. Today she reads in all genres; her only requirement is an awesome story! She writes young adult speculative fiction, including her romantic fantasy novel, The Rejected Princess, her Beguiled Series, and her dystopian Enslaved Series. You can connect with her at her website, or on social media @KatieClarkBooks.
💕💕💕💕

Katie's latest release is A DIM HOPE. It's the story of Amber and she is in trouble. Her sister is dying—and so is her homeland. The Lifeforce stones that power their world are waning, and no one knows why. When the rulers of the land prepare a scientific expedition to study the place where the veins of the Lifeforce run deep, Amber is forced to travel as a servant with the expedition. Though Amber has longed for adventure, her dream always included her sister. Now her only wish is to return home with a cure before it's too late.
Crops are wilting, food is scarce, and sandstorms, avalanches, and earthquakes threaten to doom the expedition. Besides this, there are more sinister forces at work. Quiet arguments and missing supplies lead Amber to believe their efforts are being sabotaged. She uncovers clues, but the real source of their trouble—and hope—lies in places she never expected. 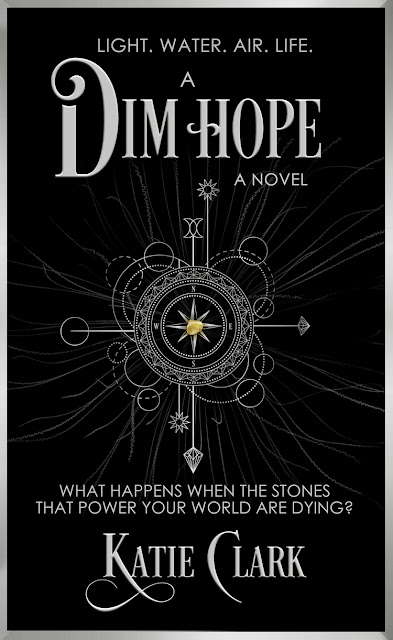 Amber gripped the rocky cliff wall that rose at the edge of the governor’s pasture. Two horses grazed in the tall, pale grasses nearby. She had crept into the pasture undetected, and now she would do her best to scale the wall without disturbing the horses.

“What are you doing back there?”

Amber gasped and lost her grip. Skin met hard stone as she tumbled from her low place on the cliff and landed on her back on the ground with a thud. Her long brown skirts tangled around her ankles and her brown scarf slipped from its place around her head and into her eyes. Without the scarf, her unruly brown curls spilled around her shoulders.

Her sister stood above her, laughing. Apparently, Amethyst was better at sneaking than she.

“If you must know, I was perfecting my adventuring skills in case I have to take your place on the expedition tomorrow.” She glanced at the horses, who had skittered away several feet. She frowned. “Thanks for the interruption.”

Amethyst laughed and reached down. Amber clasped her hand to haul herself from the ground. “Madame Governor is calling for you. She needs you to go to the village for her. The flowers and milk were not right.” Her pale purple headwrap draped loosely over her left shoulder, concealing her own brown hair. Her long purple robes flitted in the breeze.

Amber sighed at her free time being cut short as they moved toward the house. She tucked her curls back into place and wrapped her scarf around them. The cooler temperatures of midyear gave way to the heat of summer. Soon, the well would run low and the water conservation would begin. The drought would last until next spring, nine long months away. Then the waters would again flow from the mountaintops, replenishing TerraQuadro.

She wanted to enjoy the nice weather as long as she could, but such was the life of a bond slave—her time was not her own. At least, not until she turned twenty-one, two years from now.

They reached the end of the pasture. “The flowers and milk? Why isn’t Mayville taking care of it?”

Amethyst shrugged. “Madame sent Mayville home early to prepare for the festival tonight, and I have to practice with the players, so I can’t go.”

Amber frowned as they reached the two-story wood house—the second largest in the township, bested only by the K’Luren’s. White walls rose toward the sky with dark beams crisscrossing the front, sides, and back. Sand and reeds serving as decoration adorned the perimeter.

“Flowers and milk.” She sighed. “I don’t suppose we could make do with the flowers the miller sent and add our own honey to the milk?”

Amethyst held up her hands in an uncertain gesture. “Madame likes things to be perfect as we all know. She is proud of the Servants’ Festival each year. Don’t blame the messenger.”

“Amber, is that you?” Madame’s voice reached them through the open doorway of the house.

“Yes, ma’am. I’m coming.” She gave her sister one last glance and glided through the doorway. “What can I do, Madame?”

Madame held out a huge basket of flowers. The blossoms were purple—most of the blossoms in Nullaboro were purple—and they overflowed the basket to the brim. Their sweet scent filled the room. “These were supposed to be the larger flowers, not the smaller. I want them exchanged. And the milk.” She grabbed a woven sling from the table. Two jars rested inside, and they clanged together with the sudden movement. “The milk isn’t sweet enough. Have the milkman add more honey.”

“Of course, Madame.” Amber took the milk. Making it to the village without spilling the flowers or the milk would be no easy feat. Still, she wouldn’t question Madame. No one often did as they all loved her so. Besides that, Amber and Amethyst had no choice in the matter. They had worked for Madame Governor for three years, since their mother had died. Madame had taken them in to give them shelter and food—and so they could finish paying off their mother’s debt. Madame was a generous master, one who had allowed the sisters much freedom, even paying them small earnings that they could save for the future.

Amber arranged the milk in the sling across her back to be sure she would not drop anything.

Amber headed out of the house and down the lane toward the main village thoroughfare. A moment later, her sister caught up with her. “I can walk with you. The players and I will practice at the sanctuary.”

Amber frowned. “The priest allows that? The sanctuary is holy.”

“Let me amend my words, dear sister.” Amethyst, tall and thin, bested Amber’s shorter, curvier frame by at least three inches. “We are practicing in the yard of the sanctuary. In the back, enclosed by the fence, so as not to spoil the surprise for the servants and villagers tonight at the festival.”

“Ah. I see.” The milk seemed to be gaining weight as they moved. “Care to take these flowers, as we’ll be going the same way?”

Amethyst took the basket from her. “I should have offered. I’m sorry, Amber.” She sighed.

Amber studied her sister. Her best friend. Separated by only a year, they loved almost all the same things. Had almost all the same dreams. The difference between them was that Amethyst was disciplined enough to contain herself and her excitement, waiting patiently for the right opportunities to present themselves. She worked hard, gave generously, and gained love from everyone she met.

Amber, on the other hand, busied herself with making sure no one took advantage of her sister’s kindness. She stood up for her sister, and herself, and she did not keep her desires for travel and adventure to herself, much to the dismay of everyone in the village. Though they often indulged her with chuckles and good-natured compliance. It didn’t hurt that she made the best festival cakes in the whole township, and she shared them freely.

Now Amber looked to her sister. She hadn’t noticed before, but Amethyst did seem preoccupied. “Are you nervous for the expedition?”

Amethyst would be leaving in the morning to travel on a scientific expedition to the Basiin. Madame had allowed it as Amethyst’s service to the scientists would pay off one of Madame’s old debts. Amber longed to travel with the expedition herself, but Madame wouldn’t hear of both girls leaving. Since Amethyst was the oldest—and most likely because she was more disciplined—she was chosen to go instead of Amber.

Amethyst glanced at her. For a brief moment, Amber saw something there—something like fear, or maybe sorrow—but it was gone just as quickly. “I suppose I could be nervous.”

Buy A DIM HOPE at these ebook distributors:

You’re welcome. It was a pleasure.