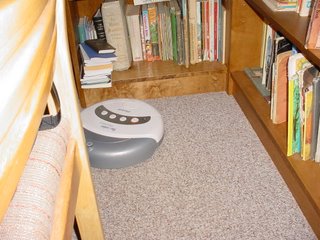 When the cook is upset...

Every year on Christmas Eve I make Cape Cod Cranberry Pie. It's easy. It's quick and it is delicious. I make biscuits and ham, too, along with vegetables. But the pie is the big flourish at the end of the meal.

However, this year I was upset. And the pie was a disaster. I had a good reason for being emotionally distraught. My mother went into the hospital (again) on Saturday. The reason she wound up in the hospital was the same this time as last time--her medication.

So in a bad state of mind, I began to mix up my pie--just as I've done every Christmas Eve. When I was finished, I knew something was wrong because the crust did not spread out as it usually does. But I stuck the pie in the oven anyway.

It came out looking rather strange.

In wasn't until it was time to serve the pie that I realized what I had forgotten to add to the crust.

I sliced up the pie and practically drowned each piece in whipped cream. It was edible, but not at all as scrumptious as it should have been.
Posted by Penelope Marzec at 12/26/2006 02:28:00 PM 3 comments:

Today I joined hubby in entertaining at an adult day care center. I led the sing-along which consisted mostly of holiday songs. Nevertheless, hubby came prepared to play a few requests--which was a good thing because there was one woman who had grown up on the Italian Riviera--the most beautiful place in the world, she claimed. Especially for her, hubby played a medley of Italian songs.

Then when hubby began to play Ave Maria, one man in the audience got up and sang it beautifully. His Latin was better than mine. :^)

I signed up for the Amazon Connect program for authors. So far, my three Awe-Struck books are included. So when anyone goes to the description page for the books, I'll be there at the bottom of the page, chatting about my books. Readers can make comments.

This is supposed to be good for business. :^)

I have a lot of company in this endeavor. There are plenty of other writers hooked up to Amazon's Connect program. It is interesting to read what they have written about their books.

This is a slightly enhanced photo of the erratically blinking light display at our house. Hubby and I put the lights on the bushes today. We still have plenty of other Christmas preparations that we must complete--hopefully soon, but to me the lights are truly one of the joys of the season.
Posted by Penelope Marzec at 12/12/2006 06:39:00 PM 6 comments: 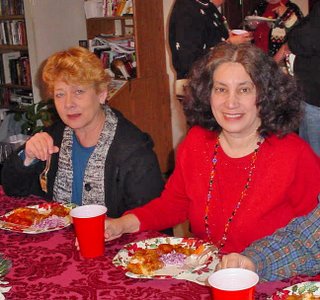 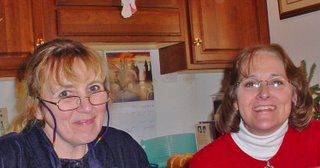 Yesterday, the members of the New Jersey Romance Writers had their annual holiday party! Everyone brought something to eat--there was a preponderance of desserts. I made Frito Pie. It is tasty and everyone liked it, but there's tons of sodium in it. 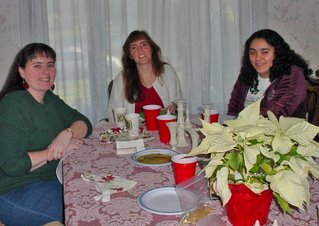 It was nice to sit and chat with everyone. Most of the time at the monthly meetings we don't have much time to gab since there is usually an informative program or workshop. Still, conversations can be a little different with a bunch of writers. Every now and then someone will say, "That would make a great title!" Or "That would make a great story!" It doesn't matter what the topic of conversation might be, there's always a good idea in there somewhere.
Posted by Penelope Marzec at 12/10/2006 01:58:00 PM No comments: 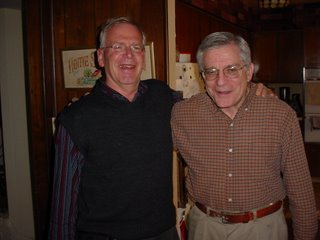 One of hubby's grad school friends stopped in to visit yesterday. It was so nice to see him since we haven't seen him in quite a few years. He lives in the Netherlands and is now retired. A long, long time ago, hubby was the best man at this friend's wedding.

Hubby's Dutch friend brought us some chocolate. He reminded us about St. Nicholas Day--which is a big holiday in the Netherlands.

The visit was too short, but we have an invitation to go and visit hubby's friend in the Netherlands. Wouldn't that be awesome!
Posted by Penelope Marzec at 12/06/2006 06:57:00 PM 1 comment:

The Past Few Days... 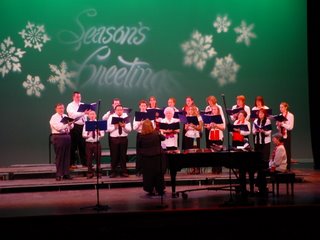 were very hectic. On Friday, Daughter #1 moved from one apartment to another. Hubby and I drove the two hours to her place and helped her with the move. She now has a washer and dryer in her apartment. So hopefully, she won't be bringing laundry home with her every time she visits.:^)

Friday night, hubby's band had a fancy Christmas party--dinner and dancing--an hour away from our home. We spent much of Friday in the car.

Saturday I had to catch up on all the things I did not do on Friday. Then today we drove to see Daughter #1 again. She sang in a concert with the choir--and it was a wonderful concert. Afterwards, on the way home, we stopped in to visit Daughter #3. We shared a fast food supper with her and then got back on the road to head home.
Posted by Penelope Marzec at 12/03/2006 08:51:00 PM No comments: