Guest Post: NO LONGER A CAPTIVE by Carol James 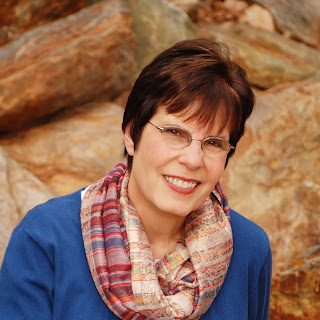 My guest today is Carol James, an author of inspirational fiction. She loves creating Redemptive Romance. She lives in Lilburn, Georgia, a small town outside of Atlanta, with her husband, Jim, and a perky Jack Russell Terrier, Zoe.

Having always loved intriguing stories with happy endings, she was moved to begin writing to encourage others as she'd been encouraged by the works of other authors of inspirational fiction.

Her debut novel, Rescuing Faith, was an Amazon number one best-seller. Visit her website to sign up for her newsletter to be the first to learn about new releases: www.carol-james.com

Just recently, Carol allowed Zoe to start an instagram page with two of her dog friends. Follow them at 3DogsandtheirAuthors to learn the behind the scenes info about being a writer.

Carol enjoys spending time with her husband, children, and grandchildren, traveling with friends, and serving in the production department at her church. And most days, in the late hours of the night or the wee hours of the morning, she can be found bringing her newest novel to life. 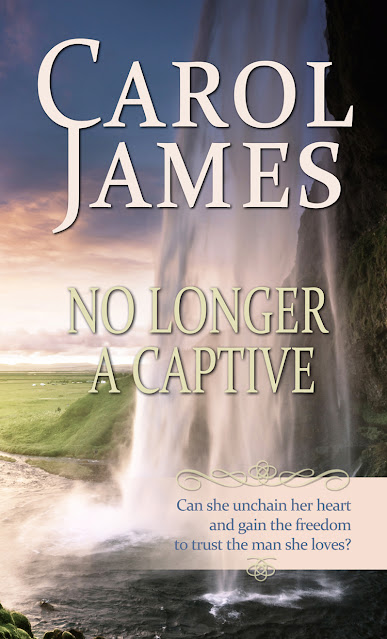 NO LONGER A CAPTIVE is the story of Ethne O'Connor. When her brother, Sean, tells her of father's unexpected death, he asks her to do something she promised herself she'd never do. Come back home.

A victim of childhood abuse, Ethne left her father and the small Texas town of Crescent Bluff ten years ago on the night of her high school graduation. She's determined to end the cycle of abuse and believes the only way to do that is remain single. If she has no husband, she'll never have children that can be abused.

Then she meets Daniel Spenser, a handsome doctor with chocolate-kiss eyes. Daniel understands her past in a way no one else does. He's lived it.

Will Daniel be able to help Ethne break the chains of captivity around her heart?

And will God release her from her past, to be free to trust the man she comes to love?

Excerpt for No Longer a Captive

“So if the Son sets you free, you will be free indeed.”

The gravel crunched beneath the tires as Ethne O’Connor steered the box truck onto the shoulder of the narrow country road. Today would be a scorcher. The clock hadn’t yet reached nine in the morning, and already the numbers on her dashboard read ninety-two. The birth of another lovely summer day in Central Texas.

The heat waves rising from the pavement in front of her mirrored the waves of nausea that had steadily intensified since she’d left Fort Worth. She shifted the truck into park, flipped on the emergency flashers, and turned the air conditioning on high. Closing her eyes, she pushed her head back against the seat and begged the cold air to rush across her face and relieve her churning stomach.

She couldn’t believe she was doing this. One May evening ten years ago, with her suitcase already packed in the trunk of her car, she walked across the stage in the high school auditorium, received her diploma, and made a promise to herself, a vow that had never been broken…until today. Sean’s pleading phone call on Monday had changed everything. She was returning home.

The nausea somewhat under control, she shifted the truck into drive, pulled back onto the roadway, and turned off the emergency flashers. One last mile to go. Anticipation was a funny thing. When she wanted something to happen, it took forever to come. If she dreaded an event, it arrived before she knew it. These last several days had gone by way too fast.

Slowing the truck, she turned left and began the journey down a meandering river of asphalt. As she rounded the final curve and her childhood home came into view, she gasped. In the ten years she’d been gone, absolutely nothing had changed. The two-story farm house was still painted white with black shutters. Large Boston ferns hung from under the edges of the front porch and swayed in the ever-present Texas wind. Even the flowers waving in the pots beneath them were the same—purple petunias.

Nine o’clock and no Sean, but she wasn't surprised. Punctuality had never been expected of him. On the other hand, Vaughn had always demanded she be on time. Even early. That requirement had served her well over the years, birthing in her the organizational skills that helped her successfully start and run her business.

She parked the truck at the top of the circular drive, and despite the heat, slipped on her sweater, and inched across the pavement and up onto the porch. She grasped the doorknob. As she expected, it was locked, and she didn’t have a key. Years ago, she’d thrown hers away because she would never need it again. If she’d kept it, she could have at least gone inside and escaped the heat.

She turned and walked toward one of the rocking chairs. A forgotten green turtle with a chipped front leg smiled at her from underneath one of the pots of flowers. She picked it up and slid back the door on its belly. A key fell out into her hand. When she was a little girl, she always believed the key was there for Sean and her—in case they got locked out and Vaughn was still at the office. That was certainly one of the reasons, but when she was eleven, she’d discovered another.

She returned the oblivious little turtle to his home and then inserted the key into the lock. Taking a deep breath, she turned the key and pushed the door open. Cool, silent darkness greeted her as she stepped into the spotless—Vaughn would have it no other way— foyer.

She set the key on the console table beside the door and then tiptoed, for some unexplainable reason, further in. She paused and glanced first toward the living room to her right and then toward Vaughn’s home office to her left. There was only one choice to make. She headed right and walked to the wingback chair next to the fireplace. Sitting, she nestled into the cushions. She pressed her nose against the fabric. Even after all these years, she could imagine the soft fragrance of Mother’s perfume lingering in the ivory brocade.

Heavy draperies hung closed over the living room windows. A shaft of light shot out from the middle space where the panels failed to meet completely and illuminated a flock of dust motes as they floated in the bright morning sun. When she was five, Mother told her the particles were tiny fairies dancing in the sunshine, but they were usually invisible. Only the magic of the sun unveiled them.

One day, Ethne had asked Vaughn if she could borrow his magnifying glass to see the fairies, but he’d refused, saying Mother had filled her head with nonsense. Fairies weren’t real.

Turns out, that was one of the few truthful statements he’d ever made to her. She now knew the ‘fairies’ were nothing more than a combination of dead skin cells, fabric fibers, pollen, and dirt. He was right. Nothing magical about that.

As she walked over to the window and threw open the curtains, the fairies disappeared.

“So, the prodigal sister hath returned.”

She jumped and spun to face the foyer. Her little brother spanned the doorway. He had grown up. The last time she’d seen him at his college graduation three years ago, he was at that stage where the calendar said he was a man, but his body was trying to catch up. He had certainly filled out, and he now sported a short, precisely-trimmed, chestnut beard. His hair, unlike hers, had deepened from bright copper to rich auburn.

“Sean. You’re late,” she snipped. This was not the way she’d envisioned their first meeting after all this time. She took a deep breath, reined in her emotions, and smiled. “Or maybe I’m a little early. I have a reputation for that.” She pulled him into a sisterly hug.

His grin answered hers. “Early, late, whatever. I’m just glad you came. I was beginning to wonder if I’d ever see you again.”

“The road runs both ways, you know.”

“Yeah. Sorry.” He held up the key she’d placed on the console table. “I see you remembered the turtle. I figured I’d find you sitting on the porch in one of the rockers.”

He set a small, black gym bag on the floor. “Where’s your suitcase? Need me to get it out of the truck?”

“Eth, I can see how hard this must be for you.” Tears filled his eyes. “Believe me. I know.”

He really had no idea. The man he knew as Dad was not the same one she knew as Vaughn.

What a beautiful excerpt.
Good luck and God's blessings with your new release.
PamT

Penny, thanks so much for letting me visit today and share about my newest release.

You're welcome. Good luck with it. It sounds great--like all your other books.

Congratulations on another release, Carol! Loved the excerpt! Kelly

Thanks so much, Kelly!